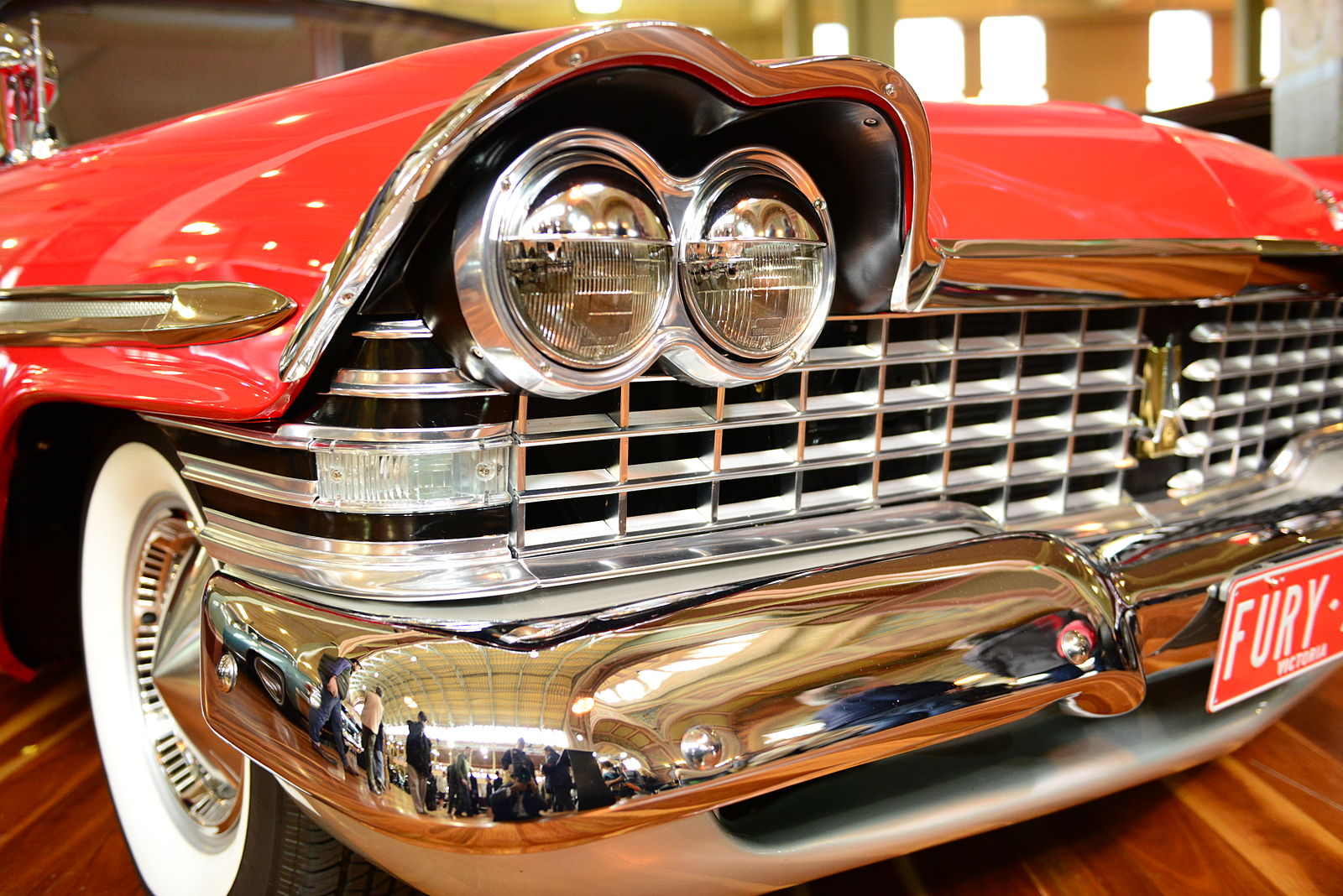 Christine is, well…not too good, but there are moments that prevent it from uglying up the Carpenter forecourt too badly. This model had a lot to live up to, following a trio of outright classics (The Fog, Escape from New York and The Thing) and certainly might be cited as the beginning of the end for JC’s place as a consistently delivering, high-performance marque: Starman has its followers I understand, and of course there was Big Trouble in Little China, They Live and the Mouth of Madness still to come, but Christine qualifies as the first miss that has remained a miss.

Carpenter refers to Christine as a “job”, not a personal project, so it’s tempting to say that we can feel his absence of love for this movie. According to IMDb she went into production before King’s book was even published, which adds to the sense of a cold, assembly line operation. Carpenter also had his mind on other things: he was interested in adapting King’s Firestarter instead and it’s tempting to wonder if that could have been his Carrie.

But dammit, let’s put such whining aside. Yes, Christine pootles along the middle of the road for much of her runtime, but occasionally she swerves close to greatness, and we should celebrate that as much as regret the breakdowns. Watching it on Netflix with absolutely no expectations, one senses that Carpenter did manage to find at least a little love for this particular possessed Plymouth. Some of his best habits and are displayed alongside the bad.

Carpenter follows The Thing’s wonderful opening helicopter husky hunt with something much simpler, cleaner yet equally delightful: The Plymouth badge, and the start and gurgle of an engine: immediately we know where we are. This machine is alive, and she’s a monster.

Sadly this pleasing atmosphere is immediately dispelled by a jolting music choice. The scene of Christine rolling off the assembly line is dubbed with an 80s track, Bad to the Bone. The sound simply doesn’t fit the caption ‘1958’, and while the rest of the movie is sprinkled with equally feeble musical gags, at least they are 50s Rock and Roll hits: Christine only plays old music – it’s one of the things that Alexandra Paul’s character finds creepy about her – so hell and damnation, John, don’t let that 80s track in right at the start! Who knows, this entire moment may have been bolted on by suits seeking to make the film more ‘relatable’, but it remains a black mark: and these poor music choices would blight other future Carpenter fare. 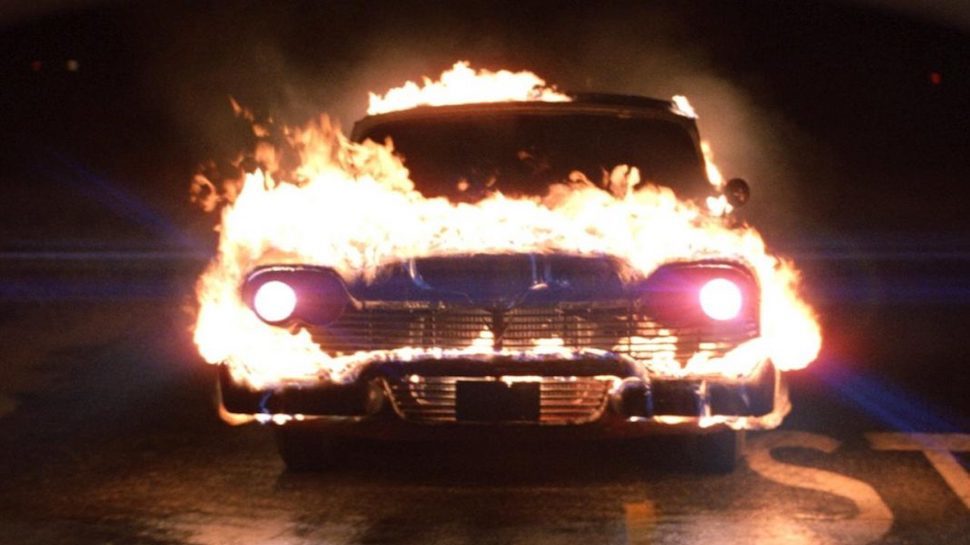 Much as the wheels aren’t quite aligned on this project, Carpenter’s flair for effects and eye for the strange and wonderful is part of the package: a UFO light floods Christine when she attempts to murder Leigh; the car beats itself back into shape, part of a strange erotically charged performance for her possessed driver; and she chases down those who attacked her while on fire, a hell chariot like no other. She’s a looker, whatever the problems under the hood.

The male hormones that flood the movie’s opening school scenes rather grate at first, feeling a little overcooked. As the movie progresses, they’re revealed to be setting the scene for antihero Arnie’s intense feelings for Christine, to whom he devotes himself above all others, and whispers sweet nothings. There are nice little thoughts here about insecure young men finding gratification for their strange urges through caring for a car, and it’s handled in largely fun, pulpy fashion – where Christine is an equally mad, jealous, kill-queen of the road. They make quite an appealing pair, and it’s easy to root them for against the jock and the princess in the film’s closing moments, however much we know they will lose. Yes, the effect is lost in what is a really muddled final third, but at least Carpenter still manages to hold an interesting discussion on the ride.

One of the most striking things about working through the Carpenter back catalogue is the sheer number of  underdeveloped parts occupied by superior actors. Christine isn’t the worst offender by any means: Keith Gordon as Arnie and Robert Prosky as Will Darnell really burn rubber in this thing.

Harry Dean Stanton, however, is a different case. He is on hand here as a detective yet is granted almost nothing to do, save one reasonable scene questioning Arnie in a car park. Following that he’s left to turn up to count bodies and look suspicious. Now that’s a waste.

According to imdb Mr Stanton’s character drives a later model Fury. Now, I don’t want to be a backseat driver here, but wasn’t there some space for some hokum here? Couldn’t an equally possessed Harry Dean have revealed himself as a fellow driver of an immortal car, and introduced a victorious Arnie to other bloodthirsty killer drivers? Mightn’t we have expanded the theme of Americans and their love of cars into Americans and their membership of car clubs? I know, I know, we’re taking a screeching turn there: but it remains the case that often the viewer is left wishing Carpenter had shaped scripts around his exceptional casts.

Sure, King hates it when people mess with his stuff, but I’m reliably informed by a great fan that his endings tend to be…not so hot. Now John Carpenter knew a thing or two about wrapping things up. They should have let Stanton rip, gone the McReady way, and said let’s just “see what happens”.