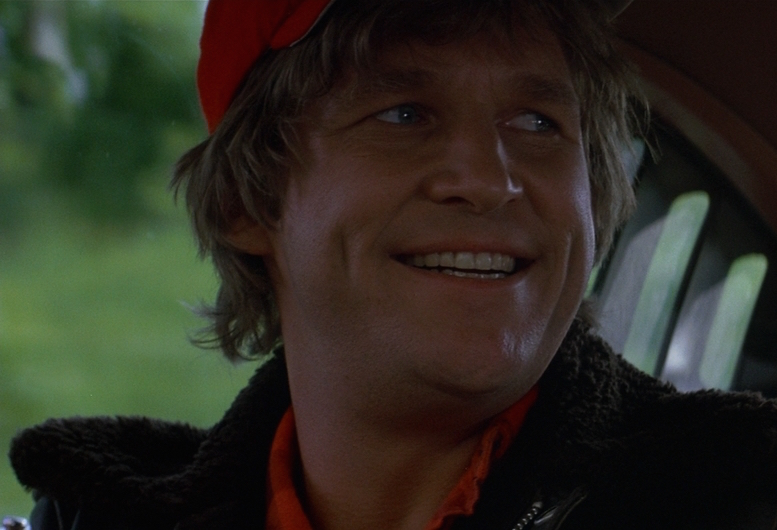 John Carpenter’s Starman: not as good as ALF

Some claim Starman as the misunderstood gem in John Carpenter’s back catalogue. There really should be too much good there for it to be bad: an alien road-trip romance featuring a comic Jeff Bridges performance, a Karen Allen lead, Mike Douglas producing and a Stand By Me screenwriter?

It’s also the only Carpenter picture to have garnered an Oscar nod (“well, look it up“), and IMDB even says there’s a remake script doing the rounds. This thing must shine just a little, right?

Well, yes. A little. It’s watchable and very beautiful. Once again there are wonderful 70s and 80s cars and even a 1930s roadster. There’s no John Carpenter soundtrack, but that’s probably because the strange rhythms in JC’s head don’t recommend themselves to romance.

That makes John’s deft direction of a love story all the more remarkable. It’s a very tender film about vulnerable characters. It’s innocent in its way, apparently inspired by Brief Encounter (and surely From Here to Eternity, which plays on a background TV). It’s occasionally funny too – it just shows JC’s powers that the movie comes across like the work of an old-hand rom-commist plying his trade.

Still, watching it as one born in the eighties, the mind can’t help turning to another Alien visitor tale of the period: not ET – which evidently helped bung this script back on the shelf for a few years –  but TV series ALF; specifically the opening episode, which makes very different story choices from Starman and trounces it for laughs in the process.

ALF speaks English right away. He just does. We don’t care about how that’s possible, we’re simply allowed to get on with the story, spared the kind of tedious nonsense lumbering Starman‘s runtime –  Bridges asking Allen to ‘define Love’ and ‘define beautiful’ .

ALF’s ship lands not in Starman‘s remote wilderness, but in the suburbs – and immediately complains about the Tanner family’s lack of a porch light. He too is pursued by an incompetent Air Force, but one that’s too scared to search his hideaway while the door is barred by the formidable Kate Tanner – played by Anne Schedeen.

Karen Allen is hugely likeable, but in Starman the story forces her character into a sort of mother/tour-guide figure to Bridges – getting him out of scrapes and explaining human habits. ALF, on the other hand, arrives fully formed with his own bad manners, which immediately rile Kate. Unsurprisingly, there’s way more fun to be had watching Schedeen clash with her uncouth alien guest than Allen fearing, then nurturing, and finally adoring her alien/ dead hubby avatar.

Bridges does provide one or two genuine chuckles in Starman. It’s a performance that could easily have been a disaster but somehow works. Still, as an innocent he can do little but misunderstand – and those jokes dry up quick. Again, this alien offers much less than the short, furry, aardvark-alike, ALF, who is at turns a slob, a fire starter, and a cat murderer.

Perhaps it’s unfair to compare the two; but the fact remains: if you want to be impressed by Carpenter’s eye and range, and some decent performances from two great actors, watch Starman. If you want a funny, entertaining alien visitor tale, save yourself 90 minutes and dig out that old ALF VHS in the attic.

Ask yourself; honestly, whose ship would you rather crashed in your back yard?