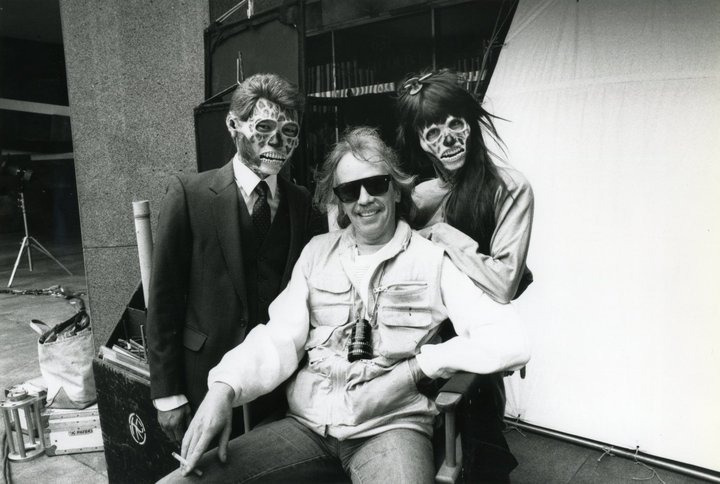 Google John Carpenter’s They Live and worrying indications of a remake surface. You can understand why someone might think about it. The ’10s’ (or whatever) have passed much like a replayed 1980s. It’s a time of rampant, exploitative capitalism; of oblivious, ostentatious greed; of ‘masters of the universe’ lording it over a docile, hypnotised mass.

Yet there are striking differences, not least of which is the quality of the most successful films: for big budget 1980s Hollywood absolutely fizzed with creativity – of a kind that we’ve only recently begun to appreciate. 1988 alone serves as a useful illustration: the top ten grossing films contained only one sequel (Crocodile Dundee 2) and were mainly original comedies (Roger Rabbit, Coming to America, The Naked Gun, Beetlejuice), original dramas (Rain Man) and the original action movie, Die Hard.

A look at last year’s top ten makes grisly reading in comparison. It contains only two entirely original movies, the rest being sequels, spin-offs, and franchises – with the top two being both remakes and sequels.

This is escapist, and really quite dumb, output. However one interprets the reasons for this slide in creativity – whether Hollywood chasing international markets or the will of our alien overlords – its not hard to imagine observing a Jurassic World poster through the right sunglasses, and seeing the legend: 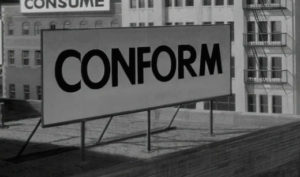 On that basis alone, the remake is sunk before it begins. The recycling of great ideas encompasses the capitalist skull-creature’s attitude to entertainment: People will pay for what they know. They don’t want to be challenged, they want a brand they trust. This would make a They Live remake a joke played on itself. And worse. It could only ever be much worse, for some fundamental reasons.

Perhaps it might be considered for a remake if it had dated; but the simple fact is that it hasn’t. Sure, there are some mullets, but that’s not enough to prompt disbelief. The city is anonymous. There are no landmarks, only timeless oil age settings: shanties, abandoned churches, sound stages, alleys, supermarkets.

Cinematographer Garry Kibbe (who also worked on Alien 3 and Stand By Me), has produced a beautiful, rich palette to contrast with the black and white sequences. There is one of those tremendous, throbbing, insistent Carpenter original scores; the ‘others’ in the film are given life through a simple mask, made more powerful than any CGI by stark, other-worldy monochrome.

Most importantly, Carpenter’s film is one of those most powerful kinds of idea – the ‘so damn simple I should have thought of it’ type.

It explored the notion of life as a mass illusion a full decade before The Matrix.

It does this without chosen ones and naff shiny leather, favouring dispossessed construction workers instead. These are people who say they “believe in America”, that they want to “follow the rules”, and only reluctantly choose to rebel.

It’s an exciting, action-packed drama with a big heart and a sense of humour, that seems as bright and fresh now as it did almost thirty years ago. Slavoj Zizek calls They Live one of the great forgotten masterpieces of the Hollywood Left, for the way it gives flesh to the most creeping paranoiac fantasies of 80s American society; of a secretive, exploitative caste of overlords hiding in plain sight, laughing at our struggles.

For now, that seems enough to keep the remake slumbering. But how long before the skull-creatures push it through the system, take the lead roles for themselves: create a horrible parody of a great man’s work, made to break our hearts and crush our spirits.