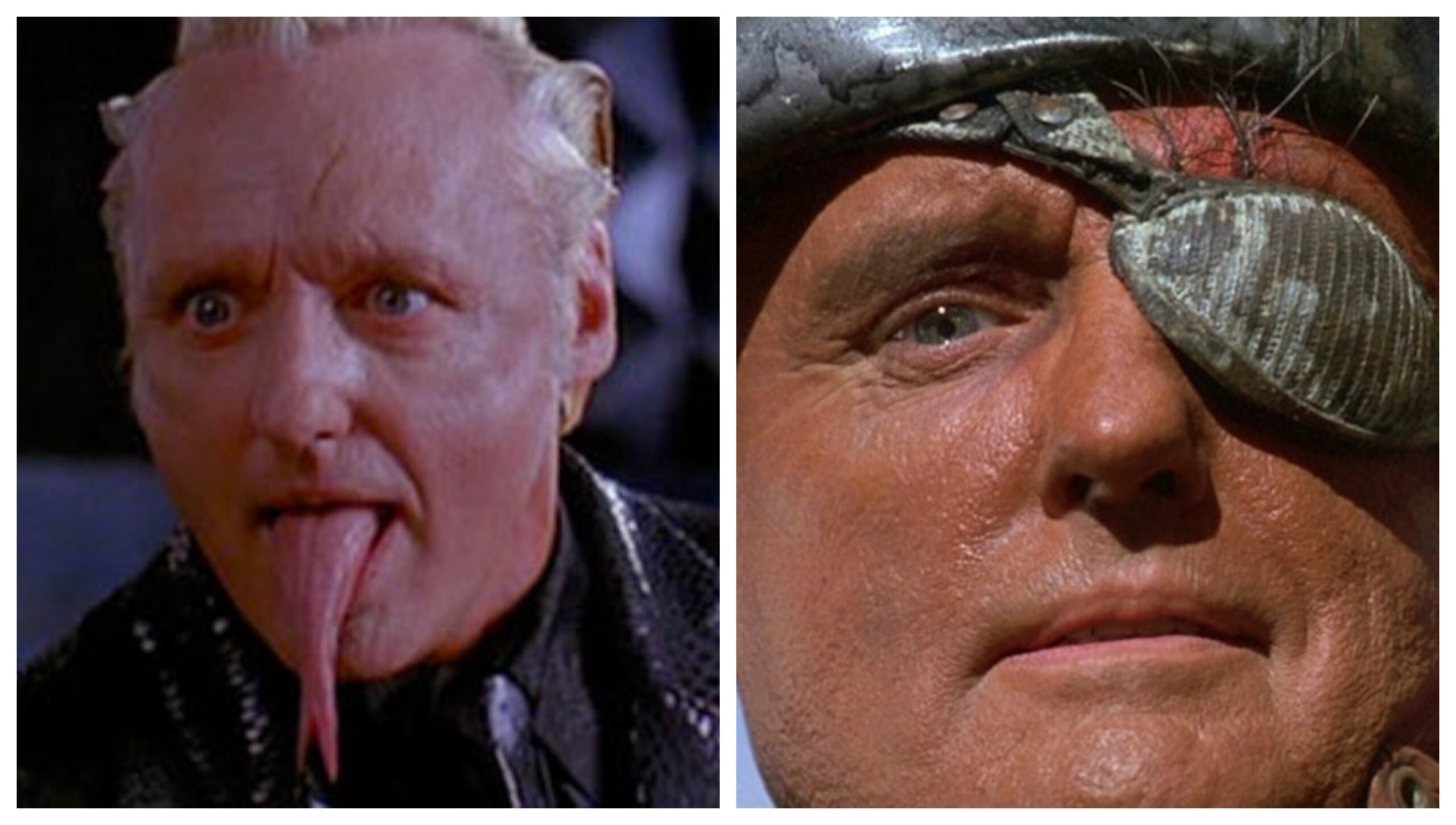 Both these movies have extinction events at the core of their worldbuilding. That’s fitting, as both helped exterminate the careers of those involved – the husband and wife directors of Mario Bros, and Kevin Costner’s in the case of Waterworld.

Both, in their own way, would attain legendary status, if for the wrong reasons. Waterwold took its place alongside Ishtar and Heaven’s Gate as one of those historic over-budget Hollywood vanity projects. Bob Hoskins would consistently cite Mario Bros as the worst experience of his career.

Watching them now, they don’t exactly rehabilitate themselves. But each at least possesses a sense of humour, they’re enjoyably cast, and sure not to take themselves too seriously. Most of all, each boasts a Dennis Hopper baddie.

Super Mario Bros is the weaker of the pair, and this is reflected in the Hopper performance.

Wikipedia claims Mario Bros was the first feature length movie to be based on a video game. In development, it seems nobody could decide if that meant it should be a drama or a comedy, the Wizard of Oz or a Japanese fairy tale. Harold Ramis was offered the gig and turned it down. They hired the team behind Max Headroom and cast Bob Hoskins, who found the production so hateful he and his costar John Leguizamo spent most of the time drinking. Not promising.

None of this need matter if we understood what the hell is going on. But the writers get in a horrible twist establishing their world.

If you concentrate very hard, you learn that the meteorite that destroyed the dinosaurs created an alternate dimension where human-like beings have evolved from dinosaurs or something. Tyrannical Hopper (King Koopa) wants a magic thingummyjig that will allow him to invade the Mario Bros’ dimension and destroy the mammals or whatever. This is all a complete mess.

But that doesn’t necessarily…matter? All we really need to know is that this other dimension, Dinohattan, is DennisHopperLand. Here Dennis eats live lizards in buns, “de-evolves” those who fail him (turning them into shrunken-headed dinosaur goons) and dreams of conquering Earth.

In Dinohattan people jump around in kangaroo boots, cars drive around powered by overhead cables and nightclubs play Love is the Drug for some reason – and then, later, as we’d been expecting, Walk the Dinosaur.

A lot of caper music plays throughout various car chase scenes. Hoskins, drunk or not, delivers a great performance, full of gurning and screaming. Rather good puppets populate the screen. Samantha Mathis puts up with a slightly underbaked role. Leguizamo is decent too.

The major diappointment is Hopper. The poor script doesn’t matter too much to the rest of the cast, but Dennis needs some words to play with, something to wrap his lizard tongue around. It’s kind of unforgivable that he has not a single memorable line in the whole picture. His freaky, zingy potential is rather boxed in, haunting his lair, until an end sequence in Brooklyn that is performed by all involved as if they are desperate for this shit to end. And that is a waste man.

Sometimes he goes too far. But… he’s the first one to admit it.

As for Waterworld there is much to love. First, there is the fact of its troubled production. Any movie that gains its own disaster legend before it is even released, where costs spiral, directors are sacked and natural disasters wipe away sets gains a certain romance.

We can only root for films and filmmakers like this, who struggle with the celluloid gods in vain. Terry Gilliam, one can’t help feel, should have been handed the reins to this one, with several wonderful pirate sequences to his name and a catalogue of epic catastrophes too.

Sure, the plot is very, very silly: fish man with gills behind ears helps chosen girl with holy upside-down map tattooed on her back find her way to mythical dry land. But this all fits in nicely with the sort of petro-punk, old Hollywood feel the movie has – of lighthearted buccaneering fun.

The movie lays its climate message on thick – but today, watching it, one can’t help wishing a few more people had paid attention. And better to make use of ‘the ancients’ mysticism than the kind of portentous bible-thumping nonsense that features in stuff like Book of Eli.

The man is clear in his mind, but his soul is mad.

But more than any other factor, what makes Waterworld is that it knows what to do with Dennis Hopper.

Hopper is a wonderful Blackbeard. Well, Blackbald. He captains a rust-bucket Exxon Valdez, patched up and turned to a slave galley, ruling over a borderline mutinous crew. He addresses his people from the bridge balcony, with brillaintly white teeth, like some pirate Mussolini. He leads raids on the attols and rafts where humanity clings on, and sails in circles searching for dry land. He is encouraged to go full grotesque in his performance, showing off his grisly eye wound, shooting prisoners, cracking jokes. Let Hopper be Hopper is the rule. What’s not to like?

We should be thankful for Waterworld. It’s fun and bright and beautiful and very nearly sank everyone involved. But it probably ties with Speed in providing the most silly Hopper fun of the 90s. Somehow, that decade rediscovered Dennis, as people beyond David Lynch found out what fun the man could be to watch, how he could chew on a line, how he could burn the screen down. And how beautifully he suited science fiction. What a gift to set him loose on these parts.

Today, there are people out there creating a Waterworld TV series. That makes sense: noe of it seems quite so silly anymore. But someone, presumably, will have to fill Dennis Hopper’s boots. And best of luck with that.