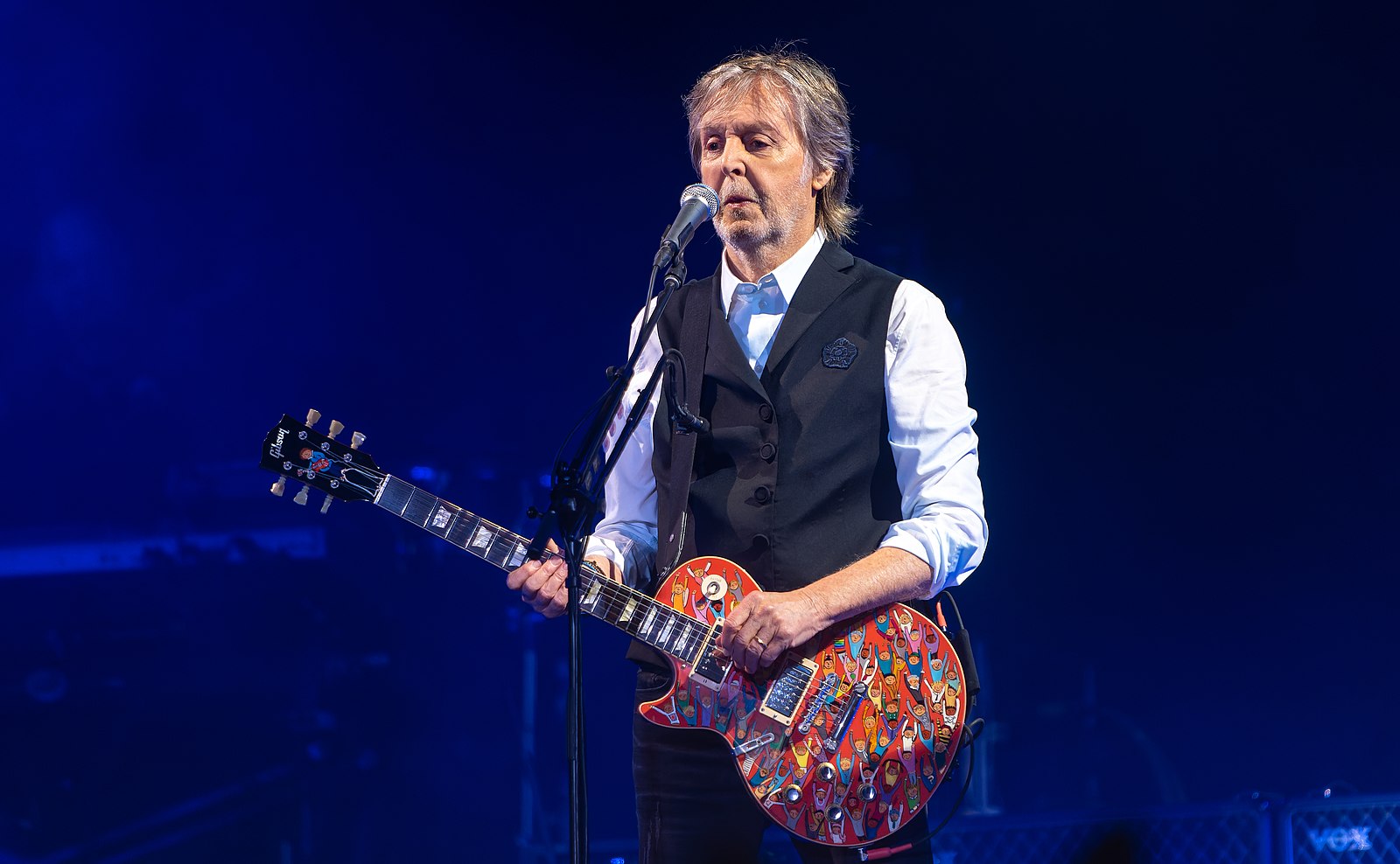 Our Paul’s Glasto set was pretty glorious – if nothing else, just for his astonishing ability to hit the notes, sort of, mostly, in a way. And for his capacity to belt out the tunes for over two hours with a kind of veggie zen that made it look as if he wasn’t even breaking a sweat.

The event even brought that special Glasto feel that doesn’t always materialise on the pyramid stage. The crowd sang him happy birthday. Lennon was up on the big screen thanks to some Jackson magic. Springsteen and Grohl trotted on and fleshed out vocals, grinning like schoolboys.

And there was Macca, spindly and strutting, addressing the Glasto hoard as if they were twenty fans on a campsite. Classic Paul rendered on the largest canvas. Fake casual. Relishing every moment. Amusingly, he wagged his finger at bad behaviour in the crowd once or twice, that inner grandad emerging as it always will.

Things looked hairy at the start: after Can’t Buy me Love, which is a fun enough opener, two rubbish tracks followed: Junior’s Farm and Letting Go. Got to Get You Into My Life made it seem as if we would launch into more familiar turf, but then we were back with the random: Come Onto Me. And what the hell is that Paul?

Following that, things thankfully settled down into what we were expecting. An exhibition of the timeless hits. Sure, that big band sound occasionally drains the life from songs (somehow they made Let me Roll It sound a bit flabby).

And sure, once or twice the big screen displayed some weird shit: Getting Better featured an animation of flowers sprouting across what appeared to be a lifeless, post apocalyptic London, having more of the look of a triffid invasion than better things. Then for the tune Valentine Johnny Depp cropped up on screen, which introduces a confused vibe to proceedings.

But mainly we were treated:

Let Em In, 1985, Maybe I’m Amazed, I’ve Just Seen A Face, Love Me Do, Blackbird (the set peak) and I Saw Her Standing There with Grohl.

One thing was striking: stuff that sounds cheesy on record works well at Glasto: Dance Tonight – which is a bit insufferable on the overproduced album – became an uplifting breath of fresh ukelele air on the Pyramid. And that raises a question about Macca’s set choices.

Look, Paul can play whatever the hell he likes, and he’s never going to choose the random back catalogue stuff I have on my Paul playlist (That Would be Something; Ram on; Wildlife; On the Way; Great Day).

But at his is age, with this much goodwill in the bank, and in this setting…it is at least a minor pity that he didn’t reverse the dump truck of garbage we know he possesses and tip it over this crowd?

Wouldn’t it have been fun to subject his worshippers to his cheesy 80s number ones? To test the limits of their faith? The hits from that period of extraordinary success contain some crimes we’ve all tried super hard to forget. Could Paul have had a laugh at our expense and gotten away with it? Maybe those songs would have found new life there?

These have been forgotten, and at this stage he’s not entertaining us, we’re venerating him. So it would have been interesting to see how such songs fared here. I guess he worries they might kill the mood. I don’t know about that. Anything but the bloody awful Pipes of Peace (1983) would have brought the house down I reckon.

No matter. As usual I was moved just to see him. God bless the mad old Scouse. The weed and the veg have been good to him, and we can hope there’s more to come.