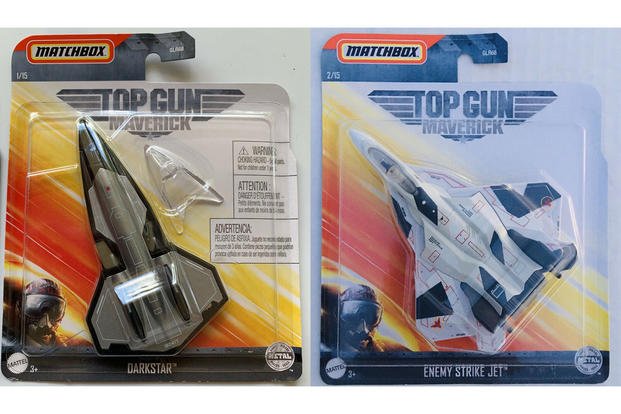 Tony Scott’s 1986 Top Gun was a fantasy, at least in part. Its ending imagined that US Navy pilots could shoot down Soviet MiGs without igniting World War Three. Which was silly.

Integral to the impotent insanity of cold war military expenditure was that the two opposing powers accumulated vast armies, navies and air forces, yet would on no account fire on the other. To start shooting was far too risky. It would too easily escalate into a nuclear conflict – a war that would last a matter of hours and have no victors.

Confrontation between these massive conventional forces was therefore performative, particulalry in the air: big Soviet Tupolev bombers were intercepted and ‘escorted’ from airspace by NATO jets. If they were really feeling naughty, an aviator might ‘buzz’ an enemy warship. All the while it was clearly understood by both sides that nobody could possibly start shooting. That big red button came with a sign:

So it was that the US Navy aircraft carrier fleet was arguably…well, useless. It was used as a sledgehammer to swat mosquitoes. Grenada in ’83; Libya in ’86; Iran in ’87. These were not duels between great nations. These were the policing actions of a superpower. The slapping around of uncooperative upstarts.

In the absence of a realistic scenario, Top Gun arrived at its key trick: Most of the action was training – simulated combat. Maverick hurtled about the place pretending to fight. The loss of navigator Goose came from an accident, not from enemy action.

It was, however, forced to have shooting at the close. Maverick had been training for that the whole movie, so he could hardly end the thing going home untested, his guilt over Goose’s death unresolved. And the encounter couldn’t be against some piffling smaller nation like a Libya or an Iran. It had to be against an enemy worthy of Maverick. The obvious enemy.

So Scott indulged in fantasy for the last twenty minutes: an ‘isolated incident’ with the Russians that allowed him to demonstrate his prowess in a dogfight with Soviet MiGs.

It worked: audiences were carried along by the whoosh-bang pointy jets. Audiences were more than happy to toss that cold war impotence out the window for a moment of Rocky 4 good v evil release. Silver jets v black jets. California X Wings tangling with Murmansk TIEs.

Depending on how you looked at this fantasy, Top Gun was either naked propaganda that helped the US Navy justfiy its essentially useless carrier fleet, or coke-snorting 80s adrenaline cinema that accidentally exposed its uselessness.

But at least the writers of Top Gun were able to name their enemy. Top Gun: Maverick cannot even do that. At no point is the antagonist country clearly identified. It’s part of a strange identity crisis which haunts the film.

The movie won’t call the enemy China, in the expectation of a lucrative Chinese release. (There has been some strange hoo-ha on social media about the disappearing/ re-appearing Taiwanese flag on Maverick’s coat).

It won’t say Iran either because, well, middle eastern tussles have rather lost thier allure. After all, what has Maverick has been up to for the last forty years? Bombing Iraq? Bombing Afghanistan? Bombing Libya? Bombing Syria? Besides, most of Iran’s antiquated air force is US kit sold to the tyrant Shah in the 70s. There’s a lot of baggage bound up in that region, none of it good.

The oddest thing is that it won’t call the enemy Russia either. Perhaps that would have been different if the film had been made post 2022 Ukraine invasion. Somehow, even that seems doubtful.

The dread of naming the enemy seems to stem from the movie moving entirely to a galaxy far, far away.

The writers of Maverick have doubled down on the X Wing approach, setting the entire film in a suspended reality. The enemy are now simply the enemy. Who cares which ‘shithole country’ they hail from, so long as the good guys fly silver jets and the bad guys have black ones?

It almost works. It’s efficiently done. Maverick starts the movie, well, pretty much in space, trying to hit Mach 10. Beautiful, well executed piece, that. He has a confrontation with a grisly Ed Harris, who says the days of manned fighters are over. (Harris never appears again).

Then for an hour or two a lot of F-18s zoom about like an entertaining flying circus. Maverick is handsome and Jennifer Connelly is rich and beautiful. Gorgeous pilots have feisty interchanges. Ice Man crops up to deliver an emotional punch. All what we expected.

Fantasy in reality and reality in fantasy

But there’s something strange going on. The writers want Maverick‘s US to be underdogs. The superpower doesn’t want to be the superpower, with the technological edge and overwhelming might. It wants to face impossible odds.

So here we’re told the enemy is flying aircraft that are more technologically advanced than theirs. That the enemy fortress defences are near invulnerable. That only a handful of pilots are available to take on this mission. They train for a high-speed flight along a trench before making a miracle shot into a pickle barrel. Sound familiar?

In Top Gun Maverick fights a peer. In Maverick he fights the odds. It is not only the enemy that’s drained of identity then. The US is not really the US here either. There are just goodies and baddies.

Strange too, that they dont go the whole hog and equip the technologically superior enemy with black drones. After Harris’ little speech at the begining it seemed a near certainty. Though fantastic, it would suit this language-less, nation-less enemy. And it would be about as realistic as the harem-scarem missle-dodging sequence that follows Mav’s bombing run.

‘It’s not the plane, it’s the pilot’ various characters repeat. A better motto might be:

The ambition seems to be that various audiences will fill in the blanks for the movie – they will decide for themselves if they are witnessing Maverick tussle with Russian or Iranian or Chinese antagonists.

Perhaps we’re seeing the start of something here. Top Gun 3 might be made without national insignia at all. Come 2050, will a 70 year old Tom be fighting for an air force with no flags, only silver jets? Or will he, like his coat, wear interchangeable insignia?

Maybe he’ll fight Russians in version 1, Chinese in version 2, and Iranians in version 3. Maybe there’ll be a version 4 where they get busy bombing Britain or Japan. Hell, maybe in some territories they’ll be depicted bombing the US.

Based on this experience, we shouldn’t rule it out.

*An additional note from my inner aviation geek*

If you know a little about world air forces, it becomes deeply weird how reality overlaps with fantasy in the Top Gun movies – and how fantasy intrudes upon real military aviation. It can be hard to figure out who the hell is fighting who.

An F-14 Tomcat, Maverick’s steed in 1986, makes a reappearance in Maverick – it’s owned by the nameless enemy. Yes, Iran has F-14s flying today, legacy of the Shah weapons deal. One of America’s greatest enemies flies one of its most iconic aircraft. TIE pilots fly X-Wings.

But Iran doesn’t have the big black 5th generation stealth jets we see the enemy possess in Top Gun: Maverick. Instead, weirdly enough, Iran does possess black painted F-5s -the aircraft that doubled as the phoney “MiG28” in 1986 Top Gun (Some of us aviation geeks never got past that Mig28 bullshit). They even build their own copies of the F-5.

Just to thicken the confusion, Iran does claim to possess a black stealth fighter, something called the IAIO Qaher-313. But this is generally agreed by aviation experts to be a rather silly model their government wheeled out for propaganda purposes – a fantasy in fact.

Instead, the big black jet Maverick fights looks a lot like the Russian Su-57 – something the Iranians certainly do not possess. The Russians only have ten themselves, because they cost such an outrageously huge amount of money and don’t really…work.

The truth is, billions upon billions are pissed away by Russia, China and NATO air forces every year on the development of tiny amounts of ‘5th generation’ aircraft. Aircraft that are sod all use. America’s F22 never saw action in its War on Terror. Russia’s Su57 has taken no part in the invasion of Ukraine.

The US navy’s new F35 is perhaps the ultimate of these boondoggles. Lockheed Martin spread F35 manufacture across the US, tying it to votes in most states, making it politically unkillable – despite the “affordable” fighter programme’s lifetime cost spiralling to an estimated $1.6 trillion. (The Apollo moon programme cost $600 billion in today’s money).

When these programmes are justified by Lockheed Martin and others, there is constant talk of the need to be able to fight a “peer competitor”. But who is that, and when will they be fought?

We return again to the cold war logic, which is in fact, nuclear weapon logic. The US’ only potential peer opponents are China and Russia. Both are armed to the teeth with nuclear weapons. It would be just as unimaginably stupid and reckless for either of these three powers to start shooting down each other’s “5th generation” fighters, for exactly the same reasons: it would too easily escalate to unwinnable nuclear conflict. That’s why there was no ‘no-fly’ zone provided for Ukraine.

They remain fantasy aircraft, built for a fantasy war. They will continue to be used in performative ‘interceptions’ of each others’ aircraft and occasionally as sledgehammers against mosquito foes. They are little more than insane toys.

If they ever do start dogfighting, and fantasy finally overtakes reality, we are all completely fucked. Top Gun Maverick is weird, but it’s not half as mad as the defence industry.