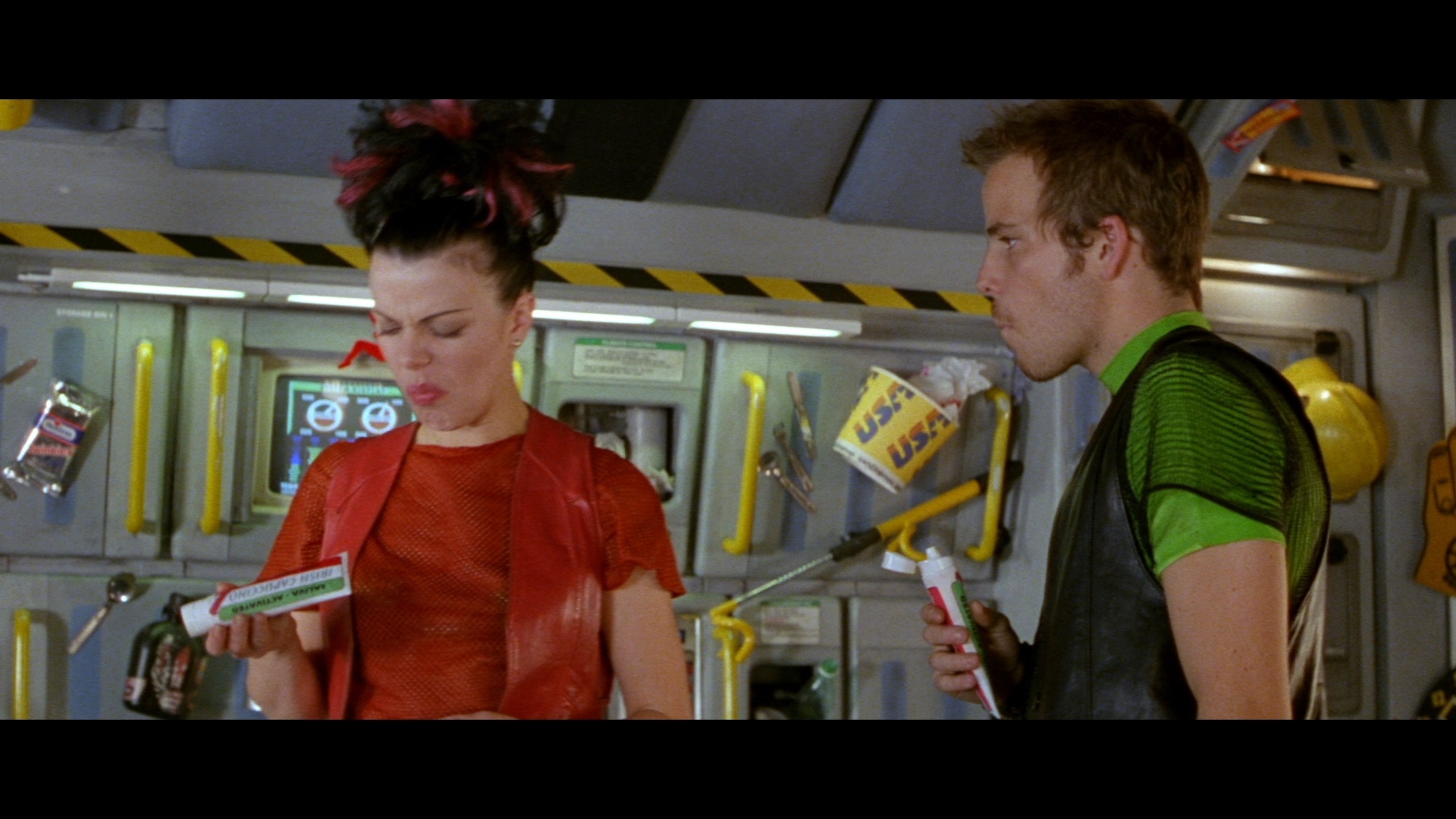 The bloody awfulness of Space Truckers (1996)

But Space Truckers…there is something mysterious about Space Truckers‘ bloody awfulness, something that leaves the viewer with serious questions. (Questions other than: ‘Why am I watching this shit? and Why don’t I go to bed?‘)

All the evidence is here to suggest a shabby tribute to 1997’s wonderful Fifth Element: the day-glo colour palette, the animatronic beasties (square pigs), the model flying machines, and the loud space fashion.

Hopper plays a schlubby, nonconfirmist jobbing driver every bit in the mould of Corben Dallas the taximan. He opens the film with a impetus – a threat to his job security, the pursuit of a woman, and a mission to save the Earth from a terrible evil.

But it’s all way, way too sleazy, without any of Besson’s glorification of love as the ultimate power in the universe. The cover for Hopper’s mission is that he’s transporting sex dolls. Charles Dance is turned into a wretched Nazi pervert. And Hopper’s pursuit of Cindi the barmaid is a little…urgh.

Cindi, played by poor Debi Mazar, wears little throughout, but this is no Leelu role, no perfect weapon. She’s tied up, drooled over and half naked throughout the picture.

Still, the obvious links to the Fifth are there. So how did it manage to produce a cheap knock off of both the plot and the look of Luc Besson’s master work before it existed? Puzzling.

Does any other film boast such embarassed performances?

Look, Dennis’ appearance in this bilge at least makes a kind of sense. He had just had a hoot on Waterworld, and clearly wasn’t too bothered what script landed on his mat if the price was right. He just about manages to conceal his contempt for his surroundings for the 90 minute runtime. But the others…oh boy.

Dorf performs like a man just freed from a malfunctioning centrifuge – dazed, dizzy, on the brink of barfing with every line. I’ve just done Backbeat and Blood and Wine, he seems to be thinking. How the hell did this happen?

It’s the same story for Debi. She’s gritting her teeth throughout. Just get through it, say her eyes. We can do this. She has the bearing of being trapped in a bar with a lot of handsy drunks. Which she basically is.

But Charles Dance is the most debased by these clammy proceedings. Sure, he’d slummed it in Last Action Hero, but he’d also done a wonderful turn in Alien 3 not so long before. Here he is utterly humiliated in the role of scar-faced, sex-pest space-pirate Nabel.

How can something this weird be this tedious?

Just to recap, this is the story of Dennis Hopper, a space truck driver in a country and western future, fighting Charles Dance the space pirate and his army of killer-bots – with supporting turns from Vernon Wells and George Wendt and direction from Stuart Gordon, the man who brought us Re-animator. How is it then that it manages to be so dull, cheap and grim?

And what strange decision making process spits it out for free on Amazon Prime, to snare the unsuspecting 90s sci-fi reviewer? Where is Gordon’s other work, O mighty Amazon algorithm? Where are Robot Jox, Fortress and The Pit and the Pendulum starring Lance Henriksen?

Am I really going to have to buy this stuff?