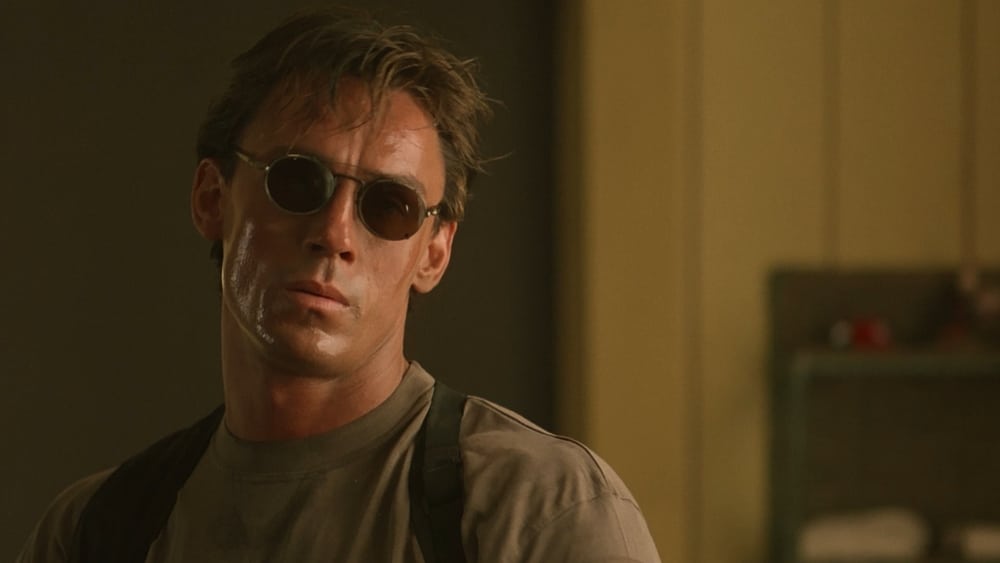 1992’s Nemesis: the strange future of Pyun and Gruner.

Nemesis is a bad film, yet any teenaged boy of the 1990s would surely have savoured its many strange flavours.

Pyun can’t go splashing on special effects, limiting this aspect mainly to shots of damaged metal parts protruding from cyborg flesh. These effects are weak, but obviously labours of love.

To fill the gap Pyun packs the movie with action: practical effects and stunts. Characters are forever leaping from waterfalls, running from exploding towers, or hurtling down waste chutes shooting at each other.

The plot? Well. Nemesis takes place in a near future, a standard 90s Japanic vision where the US and Japan have merged into one nation. It is a world full of places called ‘New This’ and ‘New That’. Where cyborgs live in tension with humanity.

Against this background, burned out cop Alex needs to recover data stolen by terrorists in order to… do something or other. We are not really in this for people’s motives, which are never clear – except for one antagonist who tells Alex his objective is to kill all humans. That will do, OK? Let’s not get bogged down in detail. Better to sit back and enjoy Pyun’s strange recipe for Hokum pie.

Step one: liberally season with guns

This is a world of beautiful women with guns, of men in dark glasses and overcoats with guns, of cyborgs with heads that split open to reveal guns. There are infinite varieties of guns: there are miniguns, there are machine guns, there are handguns made to look futuristic with chunky bits glued on, there are grenade launchers and shotguns and guns with big scopes on them.

It can’t be emphasised enough quite how many guns there are in this world. Or, for that matter, how many gunfights take place. Barely a minute goes by without someone pulling a gun (or preferably two guns) and shooting at another cyborg. This trailer gives a pretty accurate impression about the use and prominence of guns.

And, cyborgs being made to last, they have to shoot each other a LOT to put each other down, preferably at point blank range. Gunfights in Nemesis world therefore have the quality of. Well, this:

The script stinks, but that doesn’t prevent Puyn bringing in all manner of past and future talent to liven up proceedings. Once on board, many of them elect to put on weird accents. It is as if they are all trying to outmatch Olivier Gruner’s intensely weird French drawl.

There is Cary-Hiroyuki Tagawa doing…what the hell is that accent? There is Brion James with an appauling German thing going on. There is Thomas Jane smoking lots of cigarettes and showing his butt for every second of his screen time.

There is Yuji Okumoto as a sleazy hotel owner and apparently there is Jackie Earle Haley – though, well, I must have dozed off for his bit. Deborah Shelton winds up lying on the floor with her robo-eyes scooped out. Merle Kennedy plays someone called “Max Impact”.

Most of all there is the wonderful Tim Thomerson (above – forever the dimwit tennis coach of Who’s Harry Crumb?) sinking his teeth into the kind of role where he is required to deliver lines like “You haven’t lost the edge” with a straight face.

Gruner, a former French Marine and kickboxing champion, is an astonishingly strange, wooden performer with the most wonderful array of constantly shifting hairstyles. His accent actually manages to out-muscle Arnie or Van Damme.

Credit Pyun for understanding the power such casting can have. Gruner’s enormous biceps and leaden delivery somehow create their own mysterious gravity. His peformance becomes the movie’s greatest special effect. It is akin to viewing an action movie starring a speaking Great Dane, or a sentient combine harvester.

There are a number of other Pyun movies available on Amazon Prime at the moment. Finally, that enormous library of theirs is paying off with some stupid fun.