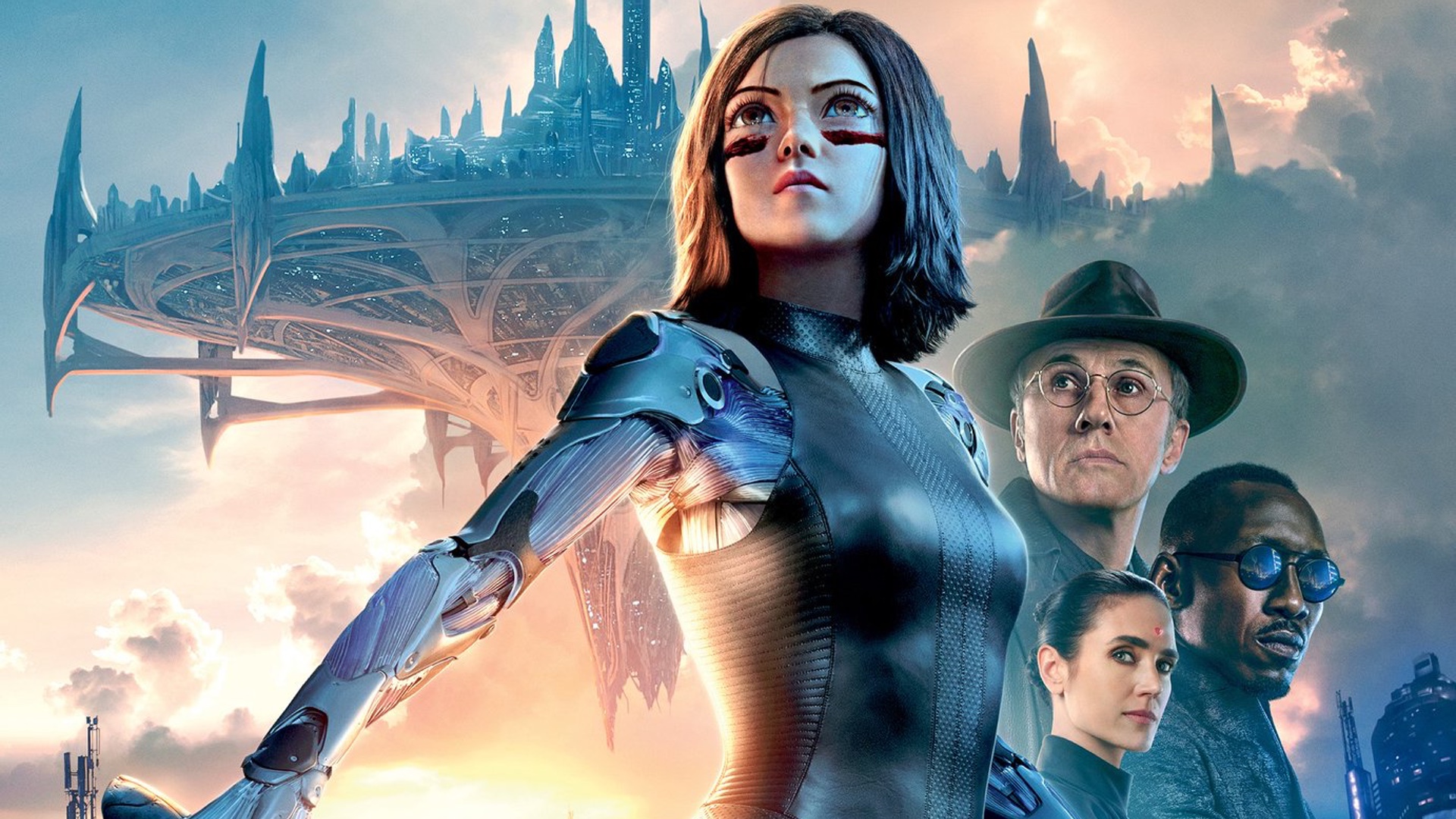 Alita has lots of features to recommend her. James Cameron’s involvement is not chief among them.

Having clutched onto the project for decades, Jimmy suddenly tossed it to man with no shame, Robert Rodriguez, back in 2016 – around about the time Scarlett Jo began taking serious flak for her casting in fellow Manga remake, Ghost in the Shell.

Problem is, Jimmy’s presence still looms large. Having produced and written the sucker, we encounter many of the problems that weigh down Avatar – and his shadow looms larger still. Rodriguez was so chuffed to be working with JC he was apparently calling him every five minutes with a question, seeking advice.

This then, is a later period Cameron movie in all but name, and it shows. Alita has elements that make some of us sit up and beg: ancient Martian spaceships, Michelle Rodriguez flashbacks and cyborg bounty hunters. Why then is it so hard to enjoy?

Likely it’s because Rodriguez was briefed to make a prequel to a movie that doesn’t exist yet. That means it keeps tripping over itself setting up moments for another project.

Still, it could have been a considerably more fun mess: all Rodriguez needed to do was lay this picture on the operating table, sever a limb here, upgrade a part there, and we could have come out more Panzer Kunst than Panzer Pfütze.

A few possible upgrades include:

Toss the love interest some lines

Cameron can’t decide if Hugo is street smart or the kind of gullichump who seriously believes a man named “Vector” can be trusted to provide a ticket to paradise.

This means that our sympathy for Hugo is limited: we’re not going to have that much time for a guy who both harvests limbs for a living and whines throughout the last third of the film.

Why then no effort to bring him to life with a few snappy lines? Were there really no potential laughs to be mined from his romantic feelings for an amnesiac cyborg killing drone?

All it would have taken was a willing screenwriter briefed to deliver Hugo with some quotable quips to render him more convincingly of his kind: something in the vein of, oh I don’t know:

A pity. In the end the only thing the audience can enjoy about Hugo is that he dies twice.

Or keep her – but then you’re going to have to cut Vector. You can’t have both of them in this movie, there isn’t room. They suck up each other’s baddie air.

One character could just as easily have covered the two characters’ roles, as race fixer, Zalem puppet, and estranged Waltz spouse. As it is, Connelly has barely anything to do other than proclaim that, as a mother, she can no longer work with Vector – and suffer an odd and faintly humorous end.

Their characters beg to be melded, but Cameron won’t trim this thing in line with the rules. Which would be fine, if he could do better. Maybe he could once. But somewhere along the line he forgot how. He needed to go back to school, relearn the basics and figure out why this picture so badly needed to

It’s quite an achievement to cast Christophe as a rocket hammer-wielding bounty hunter and still manage to make a bore out of him.

Conventional wisdom dictates that he should die somewhere between a third and halfway through our story, probably as the result of a clash with a cyborg foe, brought about by some impetuous Alita act.

You can see the scene now, right? Cradled by the sobbing Alita, Christophe reveals her secret nature with his last breath. it would propel the story forward and may, if played right, have moved us.

Pedestrian? Perhaps. But it would still beat this shambles, where the man simply will not die. He crops up again and again, even though he has nothing left to reveal. Alita should have grown into the space he left behind. Instead he keeps stomping on her moments, bothering us with what we already know. And hell, we don’t know that much. We might learn more if Cameron took the time to

Some feel Rodriguez’s depiction of Iron City is a breath of fresh air, leaving Blade Runner gloom behind in favour of a complex urban landscape that we can actually see.

It is a refreshing change, but this remains a dystopia. Christophe is established as a bounty hunter fighting a wave of lawlessness. For that to mean anything at all, the story has to give us some clue of who these criminals are, and how they relate to the future death sport it keeps alluding to.

It’s all very unclear. There are fight sequences, but often these are among the bounty hunters themselves. We know Hugo is carving up cyborgs for a living, but we’re meant to have sympathy for him. There is a big galoot, but we’ve no idea where he’s come from or what he has done.

This world building could be tidied up in one or two well written scenes. Hell, a voiceover might even suffice. The absence at the story’s heart prevents it gobbling us up . We keep getting thrown clear, distracted, asking questions like “what happened to the guy with the robo-dogs?”

Come on. Show us Zalem.

Could it be a good thing for a blockbuster to toss convention out the window? Well, potentially – just not this one.

It is a stunning thing to look at, and very accomplished in its use of effects, with a great Alita. If these had been applied to a conventional story of remembering and revenging it might have offered a decent alternative to Marvel fare.

Instead we’re tossed about, unsure who to like or where we are headed. We should appreciate being untethered from a traditional plot trajectory. We should welcome an unexpected ending too.

But it all feels an empty boast, just another spare part. The impression is of having been mugged by Jimmy Cameron, our limbs swiped – just when we thought we might finally reach paradise.

Somebody needed to tell him: Go back to basics, Jimmy. If they had, he might just have salvaged something lasting from these rolling hills of beautiful junk.