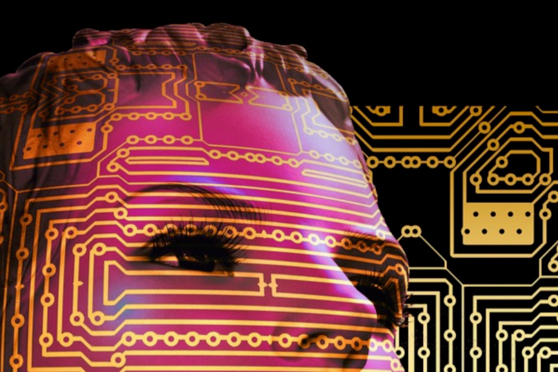 Implants and the ‘transhuman’ in science fiction

Last month, The Engineer reported on progress towards bionic eye implants. An array of silicon nanowires arranged in an electrode grid, implanted behind the retina and linked to a wireless device, has potential to restore sight.

Once again engineering news astounds and delights – the scifi eye given life.
Technological implants play a solid role in science fiction as a crucial component of the idea of the ‘transhuman’: that is, an evolutionary leap that sees mankind combine with technology to alter its perception and abilities.

Tampering with our minds

Technological implants have always played a solid role in science fiction
Interest in implants tends particularly towards the neural interface: as science has come to understand consciousness as more a product of the brain’s complex functions (as opposed to the awareness granted an immortal soul), so science fiction has explored the fascinating prospect of tampering with our brain’s computing.

Writers like to explore the farthest reaches of such progress: will implants unlock some hidden potential or do irreparable damage? Could they unite humanity through a new, shared reality, or create new conflict – between those who embrace transformation and those who refuse it? Can we forfeit some precious part of ourselves yet be better people for it?

These are all excellent foundations for stories: the fact that this research centres on the eye only rings more scifi bells. Eyes are often the giveaway ‘otherness’ in the implanted or adapted. See Star Trek Voyager’s Seven of Nine and her bulky ocular attachment.

The Borg are a reasonable representative for the portrayal of implanted characters, who are often disfigured, manipulated figures. The Borg’s implants are their chains, playing on our fears of an inescapable totalitarian commotion in our heads, countless voices drowning out our thoughts.

Star Trek’s writers return to the Borg (again and again) because the stumbling, mindless drone, ‘awoken’ from captivity, makes a wonderful character. As long-lost relatives they can comment on our society with pleasing effect.

‘Implants’ generally bad rap in cinema extends to many other forms. In The Matrix they are part of a ruthless trick, both duping man into oblivious service of machines and harvesting his energy.

In Johnny Mnemonic and Elysium they are the tool by which men are made data mules: heroes chased and harried for the precious treasure in their heads.

Novels such as Iain M Banks’ Feersum Endjinn, meanwhile, see implants deployed by the ultimate future surveillance state, allowing the King to jump into his subjects’ heads at will and see through their eyes – although they also grant humans a kind of immortality beyond ‘base reality’.

Still, The Engineer’s news shows we don’t always have to view implants as obscene, probing devices that subvert our natural function. They can repair and even enhance us too.

In recent decades, man has proven himself more than willing to bond to technology, to lose himself in other realities, and it hasn’t been all bad. Should we really fear the inevitable plunge into more intimate relations with technology?

What need will we have of dreary office spaces, when in the blink of an eye implanted workers can transfer to a virtual workspace?

We might well imagine that in such a world senior management would be unable to resist exploiting the technology to eavesdrop on employees – but would that be so bad?

In our story, tyrannical chief execs around the world eagerly monitor their employees’ conversations, only to find complete and universal scorn for their abilities. Depressed, they resign en masse. The employees learn to go on without them easily enough, and an entirely new system of labour is established, free of redundant hierarchies.

Might implants be used invasively by the government? What of a police force that boasts an implant that compels suspects to speak the truth? We could tell the story of a prime ministerial candidate who volunteers to have the device implanted, along with his own party, to prove the purity of their politics. They are wiped off the political map, as the electorate turn to the rival parties’ comforting fantasy and falsehood.

Then there is the promise of The Engineer’s news story: of restoration and even enhancement of the senses. Implants could help release the victims of strokes and debilitating syndromes, allowing them to express themselves again by providing bridges over damaged synaptic pathways.

Being human, their use might be more frivolous. We could follow the adventures of a Harley Street implant clinic that exploits a craze for implant-enhanced senses, offering its clients a dog’s sense of smell.

The service is hugely popular, and has mixed results. Many lose their jobs (being prone to wandering off into woodland and openly peeing during meetings). The more influential clientele do however, make a difference: pushing through a great world clean-air act.

This article was first published in The Engineer magazine in April 2017.