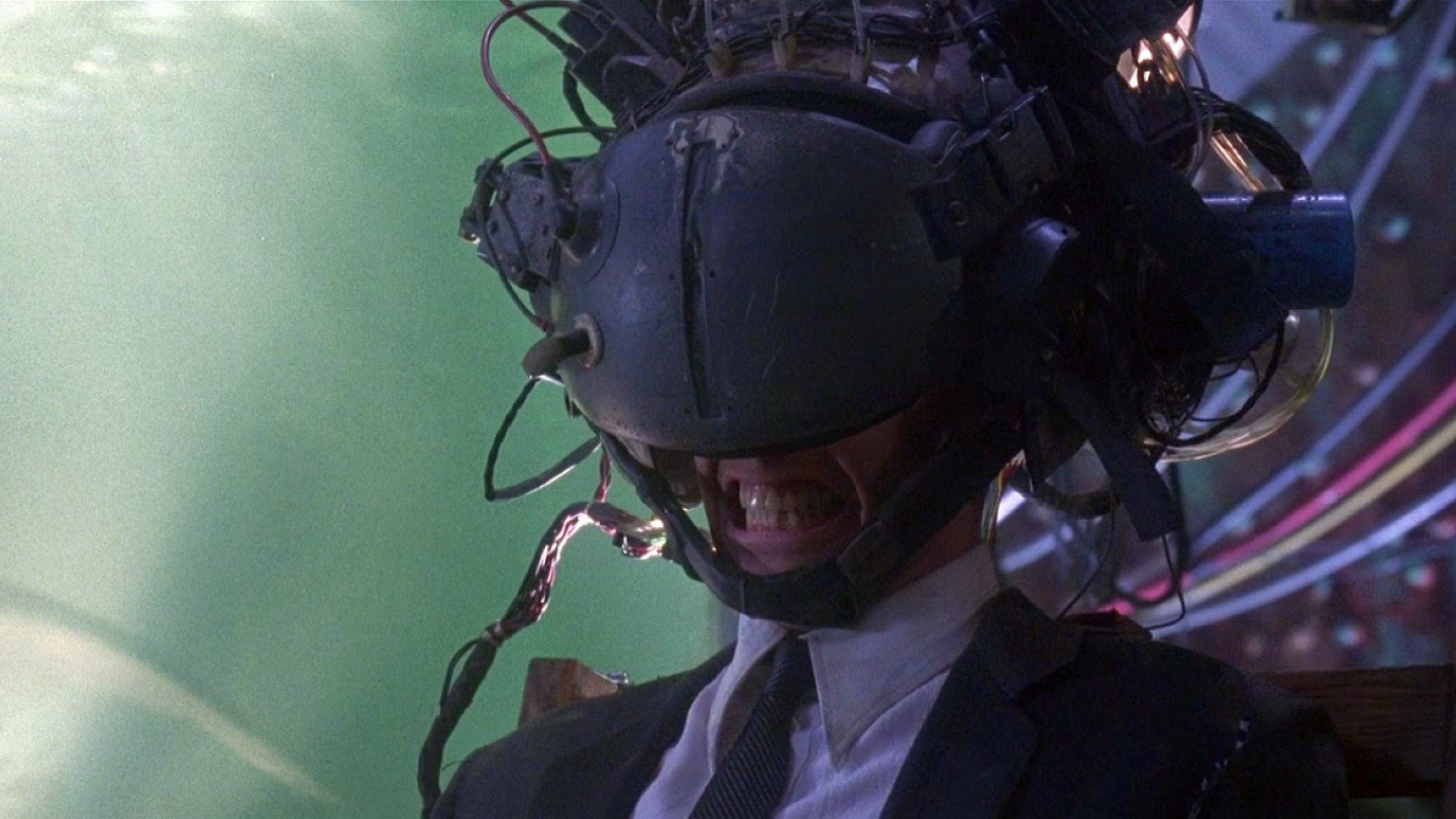 We middle aged folk are sadly incapable of loving a new film with the intensity we did as teenagers. Our brains were different then, grey cell wilderness just waiting to be cultivated.

Eventually that space fills up. Our first loves become the defining features of our cultural landscape. Everything added afterwards is overshadowed by their towering presence. That’s sad in some ways.

Still, we middle-agers do have new ways of enjoying film. For, as we grow fatter, slower and more tolerant of the average (in the face of so much bad) we can find new pleasure revisiting those films we rejected in our more impatient years.

Johnny Mnemonic disappointed me back in ’95. I read the Empire magazine preview and became over-excited about it. It was those promotional images: Keanu Reeves sporting a Reservoir Dogs suit, and some cable-sprouting cyber headset. Even the name, Mnemonic, seemed to promise a character for the SciFi ages, the embodiment of cyber cool.

In the end I abandoned it halfway through, around the time Jane takes Johnny to see the LoTeks in their bridge redoubt. I don’t think it was the story that lost me, or the script, or even the rather odd casting (Henry Rawlins, Ice T and Udo Kier turn in the sort of wooden weirdness we might expect). It was more the look of the thing.

The movie is drab: it takes place almost entirely at night, but interiors don’t strobe or glow or cast interesting shadows. There’s nothing wrong with setting your movie in abandoned subway stations, alleyways and industrial dystopia, but it had better have some kind of quality – the trick the Matrix pulled drenching everything with that green wash.

Instead, despite a 30m budget, it is shot rather like a Star Trek TNG episode, where establishing the future is left mainly to the wardrobe and makeup departments. The pictures had promised so much more.

And no wonder – they were taken from the best set in the movie, the lair of Jones, where one-off Director Robert Longo seems to have lavished most of his cash and attention – beyond the internet sequences that is, which must have munched a good deal of the budget.

Modern viewers are happy to sneer at these graphic moments now – but when the metaverse we encounter in 2021 is this feeble, do we really have a right to judge? Besides, while much of this desolate future misses the mark, it isn’t shooting that wide.

Sure, Johnny uses a fax, calls with a phonecard, and flies Concorde. But broader themes kind of work: the protests we see in 2021 Beijing are rather unlikely, but Hong Kong’s convulsions are not so far away. Johnny is chased by the Yakuza, echoing the US Jappanic of those times – but Johnny uses something called a ‘Sino-logic’ kit to get online, and is living in a future that is Chinese as least as much as Japanese.

The only America we see, a ‘free city’ of Newark, is a kind of corrupt, failed mini state, and this doesn’t feel too far over the horizon following the events of January 2021.

Most compellingly, this is a world of rampant cyber crime, of IP and identity theft on a scale hard to conceive in the mid-nineties and all too real now. That’s where the story hits home hardest.

Particularly resonant is the new layer added by Bill Gibson: that of pharmaceutical giants overreach and tyranny – a predictive bullsye in a year when major firms refused to waive patents on their COVID vaccines.

Here Johnny has a recipe in his head for the cure to the ‘black shakes’ – and Pharmacon are doing everything in their power to kill him and prevent it being shared. Because shit they invented it, it’s theirs, why should anyone else have it? Because they’re dying in a plague?

Johnny is only taking on this job because he wants his memories back – memories of his childhood he dispensed with to make room for couriered data.

Well, this isn’t quite how we lived our lives in 2021: we don’t surrender our memories; we catalogue them and relive them and foist them on each other endlessly through social media. Like Johnny we are overwhelming our minds with hefty packets of data – but, let’s face it, it is mostly junk. At least Johnny charges for his brain space, and carries genuinely precious cargo.

Perhaps the greatest disappointment for a resident of 2021 is the lack of a cyber resistance, of the kind we encounter with Jones and the LoTeks. Our 2021’s cyberspace is a lot less disputed than Johnny’s, firewalled and locked down by nation states that Gibson imagined would have withered away by now.

For all of its plain looks, the movie could have been significantly improved with some of the noir speak Gibson gives Johnny in the original short story. Hell, even a voiceover might have helped.

I rather like Keanu in this film. He gives Johnny a stiff, teetering physicality, and the make-up team go all out to make him progressively drawn and gaunt as the fat wad of data swelling his head slowly kills him.

He has some decent lines that he doesn’t deliver particularly well, but the language of the story is still painfully absent here.

We see Bogart on the TV in the movie’s opening scenes. He would have enjoyed chewing on some of the descriptions Johnny uses in the short story, especially of the people he encounters:

The kind who sing the corporate anthem and cry, who shake hands endlessly with the bartender

A mild little guy, the kind most likely to wind up drunk on sake in a bar that puts out miniature rice crackers with seaweed garnish

Keanu doesn’t get to talk like this. His character is poorly developed. He yells that he wants room service at one point, as if this fits with an established character, but it doesn’t actually sync with anything else we’ve seen. He is maybe to much of a blank here.

Perhaps this is the result of executives messing with the script. Gibson says the film was slashed by the studio, lost much of its structure and style.

This could well be true. Excellent actors are weirdly wasted. Dolph Lundgren’s character, while quite a watch, should make way for Takeshi Katano – the only actor with legitimate charisma in this thing, whose character is frustratingly peripheral, his motives hardly explored.

If you haven’t read the short story do check it out. It makes an interesting companion piece to the movie and shows, above all, that Gibson knew what he was doing, adding a great deal of new material and expanding the structure highly successfully. It is the production that let him down, not his writing.

By all accounts he was rather dismayed by Johnny Mnemonic. But, having rewatched, I find myself rather fond of it. There is certainy a good 320GB of data clogging up my memory banks I would ditch before losing this film. For all its faults, it is not a shameful enterprise. For that, look at the property Stallone was murdering that year.