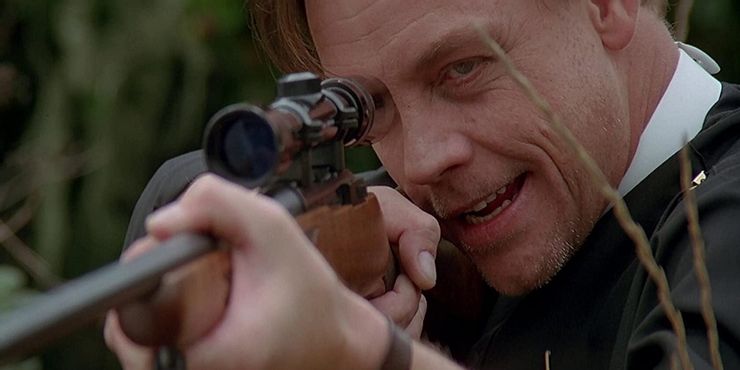 John Carpenter’s Village of the Damned (1995)

Get on with it, you think, then: oh God, just stop. Only those intent on reviewing every single John Carpenter feature persevere.

There is no outlandish James Woods performance to lift the tedium, no interesting Carpenter tune, not even a striking visual moment. There is only some bizarre casting, and a wonderful peak-Wyndham concept that Carpenter seems curiously bored by.

Village of the Damned reeks of JC’s apathy.

Even the opening shots are lazy: deer in an open field, a meandering view of the ocean – what the hell do these images have to do with anything? A John-who-cared would have scrapped the whole pointless sequence. While he was at it, he would have lost the ghostly whispering too – the sound that wakes Christopher Reeve into the hell of this role, whose opening line will be: “did you hear something?”

“We don’t need the whispering,” John-who-cared would have decided, “or the cheesy shadow effect. We need to quickly introduce Reeve and Linda Kozlowski, make the audience like them, and get to the incident that makes this story.”

It takes forever to arrive. When it does come, it falls flat. Was JC was even present here? Half the film doesn’t feel shot by him. The camera just looks at its locations with an estate agent’s eye – the barn, the medical centre – not bothering to find some ominous aspect. It scans the massed ranks of parents and children in church with wedding video tedium. It;s just not interested in seeking out some perspective that might show off the strangeness of the event.

The worst aspect is the neglect of characters.

Mark Hammil is here, cast as Midwich’s priest, and we learn not one single thing about him. He acts haunted from the first moment, like someone who hasn’t discussed his character’s arc with his director. He only floats in the background, looking as if he could call down some highly entertaining fire and brimstone given a little direction. And a far, far better script.

Then we have Kirstie Alley, a woman born with wonderfully sultry noirish charisma, who never finds her voice. She only ever implores Reeve to ‘come back to the programme’ – something she may as well be screaming at Carpenter. Her scenes with Reeve never take off, because they at no point speak or behave like people, or even like tropes. They only bump about, more inhuman than the children. Alley falls back on brandishing a cheroot, gesturing with it to where a line should have been.

Reeve, appearing in his last movie before his terrible accident, at times looks flat out annoyed to be there, for it to have come to this. Well, we’re not mind readers, we can’t be sure what he thought. But he epitomises the feel of the film, that this is a production where everyone is gritting their teeth and just trying to get through it.

The final damage is inflicted through the editing.

Edward A. Warschilka worked with JC on some more of his later bloated fare, and here is rather found out. He hardly bothers to trim the long, dead, panning shots, or inadvertently comic dream sequences. He manages to deflate the one or two potential jump moments, like the barbecued man.

Having slogged to the end, it’s hard to know what to feel. Should we be annoyed with Carpenter – for assembling this crew and this set, these rather good child actors, and then simply not bothering to give it his all? Or should we pity him, for being trapped in a loveless project, and finding no reserve of enthusiasm to call upon?

Hell, any creative churns out dross at one point or another, and few of us will even begin to approach the highs of John’s career. Who the hell are we to judge some later career mis-steps?

Yet, overall, the feeling remains of wasted opportunity.

Wyndham is under-adapted and ripe for exploitation. The most striking absence here is any discussion by characters of childbirth, of violation, of motherhood, of post-natal depression. Of anything, in fact, that the story is about.

You feel that a John Carpenter with even a little juice in the tank would have found something worth playing with here, would have created a village truly worthy of the name “damned”. That, in fact, he simply no longer felt the returns of film-making were worth the effort. Which hardly bodes well for the last few movies we have to cover on this project.