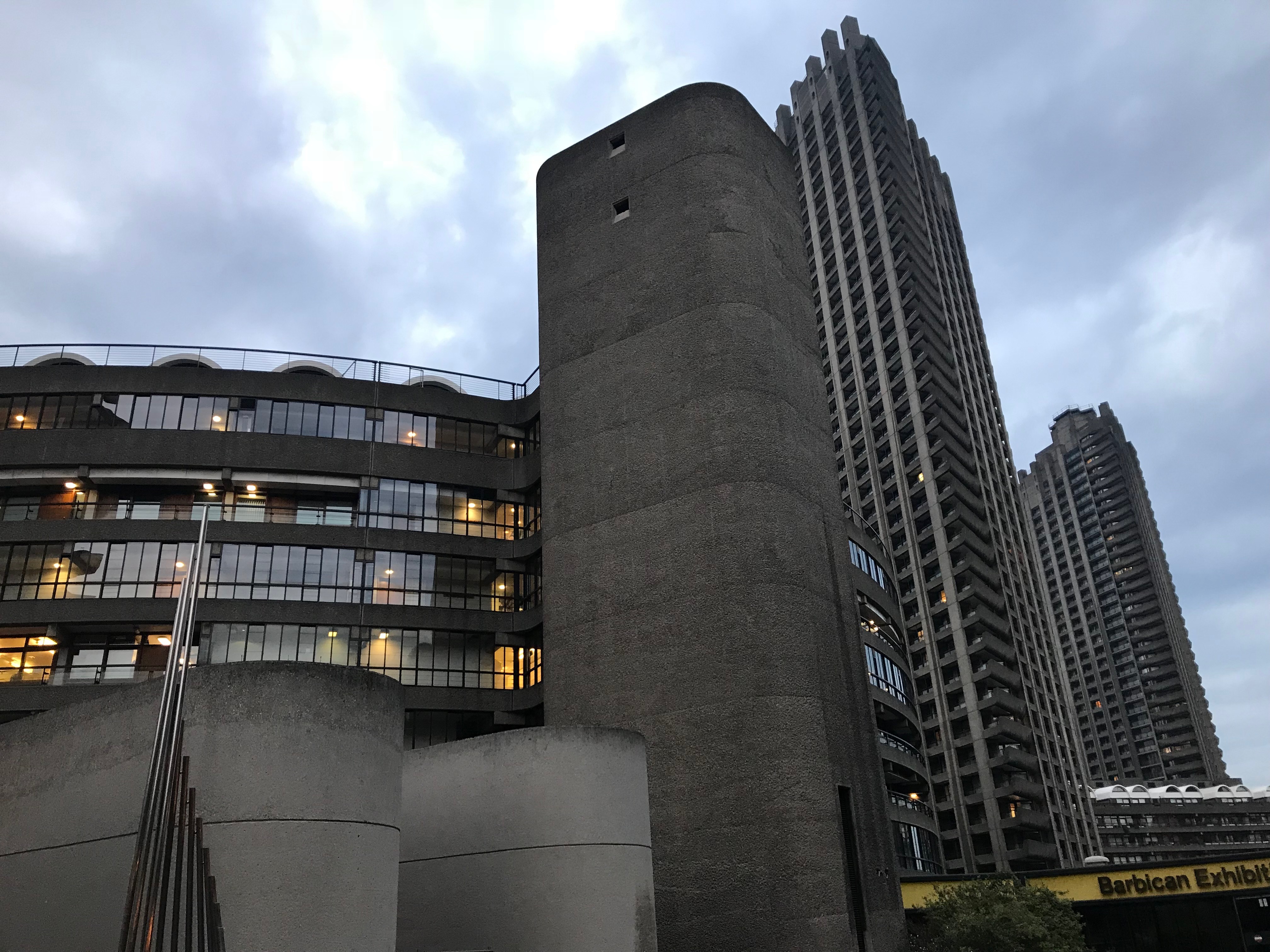 If, one day, you happen to find yourself travelling from the Old Street area towards St Paul’s, there’s an excellent walk to be found through the brutal maze that is Barbican.

The immediate area around Old Street tube is one of the most hectic, traffic-tortured areas of London, overlooked by some of the city’s nastiest, haphazard architecture.

Still, it’s not such a bad place to start a London walk. Arrive around 12PM on a weekday. Best head south along City Road and hook a right into Bunhill Fields Burial ground. It’s a peaceful little spot where office folk knock back coffees, among beautiful memorials to John Bunyan, Daniel Defoe and William Blake.

Stop for a pint in the Artillery Arms (once one of London’s premier rat-baiting venues), then follow Dufferin Street, taking a left into Whitecross Market, picking up a Burrito, crepe, or whatever takes your fancy – provided you can be bothered with the queues of course.

Follow the little passage opposite Errol Street, cutting through Fortune Street Park (another pretty, busy little green space). Cross over Golden lane, and take the ramp by the UBS Headquarters (or the Cripplegate Free Library, as we might wish it still was).

Step 2: Barbican up on high

From here you head up into a great raised plateau that links the parts of the strange, wonderful Barbican – Brutalism still being the only post-war architecture in London that had a sense of mission beyond bellowing at its neighbours.

Not that it always works… they really might have invented the word ‘complex’ for Barbican. Right away, you’ll be lost: confronted by a wall of pillars and shadowy spaces, overlooked by hundreds of flats. On many occassions the place seems deserted.

Don’t panic. This is an essential part of the Barbican experience. As is consulting one of the many maps, and feeling even more lost.

Search your feelings. Follow your gut. If you see a sign for Cromwell Highwalk, and find Cromwell Tower to your left, you’re headed in the right direction. Ish.

You may well pass a column and find some Londoner peeping out at you from behind it: again, this is to be expected. All those nooks and crannies encourage lurking.

You’ll wonder, first time out, if you should really be up here, but you’ll notice other Londonders mooching about unbothered. Trust their nonchalance. You belong here. These places were designed as streets in the sky: they’re not just particularly well used or signposted. It’s almost as if the City of London would rather you didn’t know about them.

If you pass the entrance to the Barbican Exhibition Hall, you’re on the right track. Here you’re struck by a fresh view of two great ribbed concrete towers, and smaller concrete chimneys and vents.

You might dismiss the towers as hideous blots, or monuments to a time when towers were at least conceived as part of a great social project. Either way, there are benches here, and raised above the traffic it’s not a bad place for a rest.

Continue on: past the great Barbican greenhouse, concealed behind smeared windows. Who knows what transpires among those great sweltering palms.

Head down the stairs and turn a sharp right, following a corridor lined on one side by a beautiful mosaic. Then hang a left, onto a covered walkway. You may hear squeaking, parping, shrieking.

This is not the lair of some strange London beast, but. the rehearsal rooms of the Guildhall School of Music, where brass, string and percussion virtuosos of the future squeak, wail and hammer away the hours, sending out a pleasant little echoing soundtrack.

You can look in through a dozen little portholes to see them at work. It’s an uplifting experience, and the kind of thing that make you think that your mother was right after all, and you should have stuck with the piano, not given it up in favour of some daft endeavour like writing.

You’ll pass the bizarre monument on your right and head straight on to the excellent raised overpass, which travels over the expanses of Barbican lakes. Here those in the know take pictures or simply commute, taking in the sights of the heart of the Barbican complex: the Barbican centre itself, spilling out visitors onto benches and chairs; the school for girls, the great lakes, the flats.

It is the kind of space that might make you wonder why London couldn’t have all been rebuilt in such fashion. Maybe the mistake was to let towers be built in isolation elsewhere, where here they are joined by a landscape shaped in their image.

However innocuous those towers may appear on the London skyline (and boy do they have company now) they are at least the projections of a neighbourhood. It’s not the most bustling neighbourhood, true – it can be a vert still place – but its gives the impression of not being for the want of trying: unlike the many ghastly, barren wastes to be found round Battersea.

They also, even on a bomb site, took care to embed something of the past here in Barbican. St Giles stands there still, a piece of a lost stone world plonked among the concrete – host to an excellent book fair, if you happen to pass at the right time.

You might also glimpse your first sections of London Wall.

Carry straight on, past a number of Barbican flats, then hook a left on the new raised walkways running around the newly refurbished Salters’ company building: about the only structure around Barbican that complements Barbican’s architecture – all the buildings on the east side of Moor Lane are extremely nasty.

From the raised walkway you get an excellent view of a stretch of ancient London Wall, now landscaped with gardens, and even the remnant of some kind of yes, Barbican.

What’s more, by turning right, you get to cross above one of London’s top 5 nastiest roads, London Wall. Take it for someone who used to cross at street level: it’s better up here, looking down on the City’s stressed out traffic and harried foot-soldiers.

Far better to stroll over it, crossing another ghostly plaza space and descending towards Guildhall’s North Wing and beautiful West Wing.

Form there. your back on street level, taking your life in your own hands as you dive in and out of the maze of little interconnections near the bank, as bikes, cabs and black mercedes hurtle by.

Cut through the modernist poultry building if you like, then take the dodgy crossing by the honking great new Bloomberg building – which, while a nice enough structure, has been the scene of endless roadworks since its opening. Why is not entirely clear. If you’ve booked ahead you can drop in and see the Temple of Mithras, bombed to the surface during the blitz.

Then you;re at Cannon Street, where you can browse the world’s smallest WH Smith and see if South Eastern trains are in the mood to be in the train operating game. And your magic walk is done.