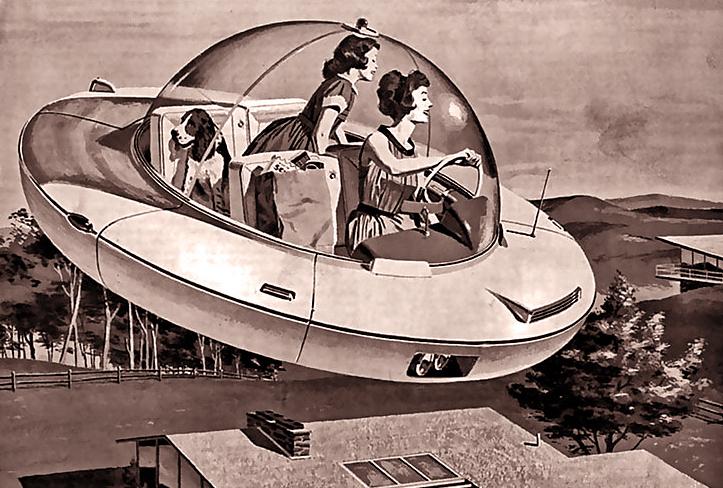 For decades the idea of the flying car has helped shape our vision of the future, every bit as much as the robot and the rocket ship. For Popular Science enthusiasts of the 1940s, 1950s and 1960s, the air car would be the inevitable culmination of aeronautical and automotive engineering. Even Henry Ford said flying cars would come. Where the automobile had granted the masses freedom from the train, we would inevitably gain independence from aircraft.

Even now, despite a catalogue of failures, efforts to realise the dream continue, as if the 21st century feels obliged to meet the expectations of the 20th. Most attempts are unwieldy mutations, but engineers gamely plug away at the challenges, delivering chimera after chimera, with a host of new projects on the block: John Brown’s Carplane, Airbus’s Vahana, Urban Aeronautics’ Cormorant and Japan’s Skydrive, to name but a few. Uber, ever free with a headline-grabbing press release, promises a fully electric VTOL taxi in five years.

The Engineer’s readers are largely unconvinced about the utility of such projects. A recent poll found the majority believed urban aerial transport to be unworkable. Comments online highlight the environmental and infrastructure challenges of flying vehicles – besides the limited ability of some to master the ground vehicles they already possess.

Why does the dream endure?

Why then, does the dream endure? Science fiction’s approach to the subject is instructive. The flying cars of scifi have tended to serve as the vehicle of the outsider: Back to the Future’s retrofitted Delorean; Corbyn Dallas’s battered yellow cab in The Fifth Element; and Dave Lister’s stolen Hopper in

. Such devices help establish their owners as outlaws. Doc’s machine lets him roam free of the laws of physics. Dallas’s cab allows the alien, Leelu, to escape the clutches of Earth’s government. Lister’s stolen Hopper taxi lets him scrape a living on the fringes of Mimas spaceport.

It’s this promise of living unleashed that fires the imagination. Inventors and scifi writers care about the flying car precisely because of its potential to free us from the grip of regulation, the watchful eyes of a speed camera, and from the cattle-truck conditions of check-in and economy class.

The chaos of a sky buzzing with countless air cars offers science fiction writers plenty of scope for more tales of outlaws and fugitives. How, we should ask, would ubiquitous flying cars affect the face of future cities?

A story could take place in a future London, where thoughts of third runways are as dead as those of ‘Boris Island’. Heathrow is an abandoned boneyard, where legions of unemployed pilots, stewardesses, check-in staff and baggage handlers camp among the wrecks of their once mighty jet liners.

Their services no longer required, their status plummets, and the former air workers pick a living wandering a new skyline of rooftop landing pads, bothering their one-time passengers with offers to wash their windscreens.

In this new world the average family can even traverse oceans with ease, as a new generation of service stations bloom at sea, catering to the air car diver’s fuel, food and entertainment needs. Converted tankers make air car parks of their decks and restaurants of their holds.

One enterprising captain turns his ship into a floating arms fair, smugglers den and casino beyond the reach of the law. The world’s governments tolerate his operation, until he begins dredging and building his own chain of islands in the north Pacific, declaring himself king of a nation state.

Edging too close to US territory, a fleet is dispatched to conquer his upstart nation. Our king sends waves of air cars to meet the jet fighters, resulting in a bloody second battle of Midway, and ending his mad dreams of empire.

Indeed the air car’s potential to facilitate illegal activity may well stifle development before it’s born. Governments will have no love for a vehicle that easily traverses borders unchecked.

A story could see a band of ‘good old boys’ wage a new Prohibition-style border war, using souped-up flying cars to smuggle contraband over the Great Wall of Trump. Just as bootleggers spawned Nascar, so their vehicles spawn a new era of racing, a kind of steeplechase motorsport, offering spills and thrills to a whole new generation.

The flying car may promise a chaotic future, but we shouldn’t count it out yet. Why, after all, do people buy Ferraris? The image of freedom, speed and danger is at least part of the allure. ‘Flight mode’ would unlock a whole new world of deadly thrills. Expect queues at your local showroom.

This article first appeared in The Engineer magazine in February 2017.