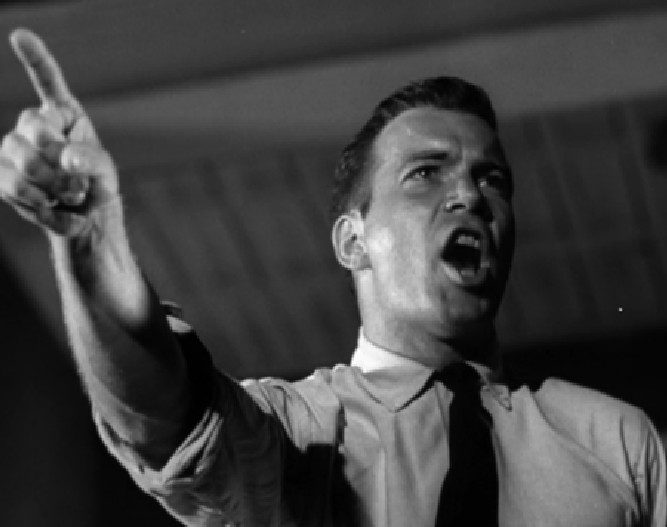 As we approach 2017, movie lovers in search of guidance could do worse than take in this Roger Corman ’62 Shatner fest, a black and white morality tale populated by all manner of familiar demons. Shanter plays Adam Cramer, a charismatic cynic drawn to the resentment and fear bubbling under the surface in a small southern town.

Cramer has been despatched by the “Patrick Henry Society” to address the “integration problem” – a judicial order which compels the people of Caxton to share their schools with their black neighbours. Shatner’s allegiance to the Society is token at best. From the first moment we’re alone with him in his hotel room, watching him gleefully pretend to shoot his gun, we know that we’re dealing with a malevolent child, here to satisfy a hankering for conflict, and the possibilities it presents for power over frenzied crowds.

Shanter gives a wonderfully sleazy performance, grinning as he works about town, prodding slumbering forces of hate and fear, tossing scapegoat scraps to the community’s unhinged creatures . Cramer’s rhetoric, preached on courthouse steps, paints segregation as the expression of freedom, integration as the imposition of arrogant, federal elites. Of course he doesn’t really care either way, but has realised there’s power to be had in speaking the unspeakable: Caxton, he says, should be “Free, white and American”, as if the three are indivisible.

Cramer:
The quickest way to cripple a country is to mongrelize it

Cramer draws a big crowd. They gather in torchlight to shiver in excitement as the prophet informs them they’ve been cheated, thrills them with the notion that their darkest thoughts are justified, even decent. The film pulses with discordant marching music as Cramer leads his dispossessed people to picket schools, shrieking at frightened children. His contempt for his crowd’s values knows no bounds; he forces himself on his neighbour, then poses as the guardian of white chastity (framing a young black student for the rape of a white girl).

Tom McDaniel:
One thing Adam Cramer’s done for us: he’s made us face ourselves

The movie offers us both despair and hope for 2017. Despair, because Corman assumed that it would take a handsome young man to dazzle and lead such a mob – and that, when exposed as a lie, his revolution would fizzle out. 2016 has showed that the most haggard creature may lead an insurgency, the most corrupt be forgiven in service of righteous fury.

Yet there’s hope too: In Tom McDaniel it depicts an imperfect man prepared to confront his own easy prejudice in the face of Cramer’s manipulation, even if it loses him an eye. Cramer, for Corman, is a kind of virus, a fever that runs its course and leaves a stronger, wiser host. Perhaps 2016 was the onset of such an infection. Corman believes that reason and bravery offers a cure. Here’s hoping.