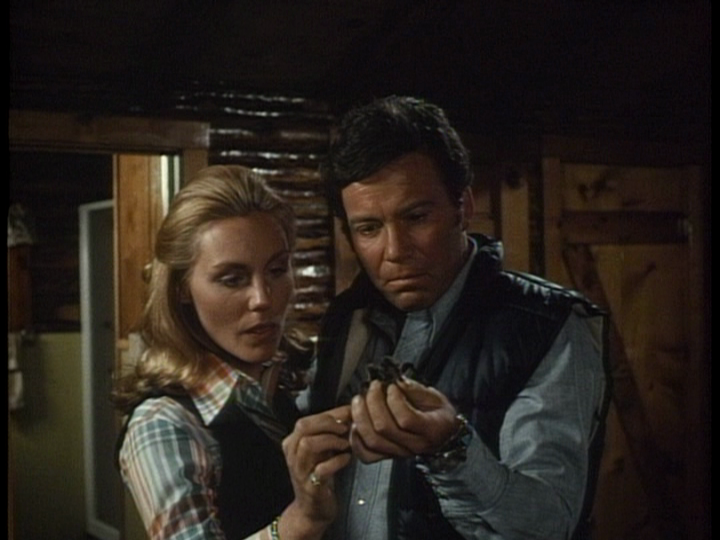 With a creepy-crawly themed column to write for The Engineer, but brain drained of power, watching a trashy bug movie too easily became justified as ‘research’.

Spiders stars Bill Shatner, and with higher than expected reviews on the internet – not great, you understand,  but not as abysmal as the same year’s similarly titled Empire of the Ants – a viewing turned out to be worth the time. It’s a Tremors-esque tale of an isolated town falling prey to unnatural nature, with Jaws overtones thrown in for good measure (complete with ‘we can’t close down the county fair’ mayor). Sure, watched through modern eyes there is not a single effective scare to be found in the thing, but there are other pleasures.

Bill is fun to watch in just about anything, but it is particularly pleasing to see him decked out in cowboy hat and jeans as lead Rack Hansen (Rack?). Shatner chugs beer, rides horses and sleazes onto his dead brother’s wife before spider proceedings even get started, sporting Gillet and lab coat with equal aplomb.

There’s also a nice bit of writing around his relationship with Tiffany Bolling’s Diane Ashley – his dimwitted efforts at midwestern seduction see her shoot him down again and again, and while this sadly can’t last, it helps make Ashley likeable. It helps Shatner too – his desperation is a hoot, even abandoning his own car at one point (along with his dignity) in pursuit of blonde satisfaction. 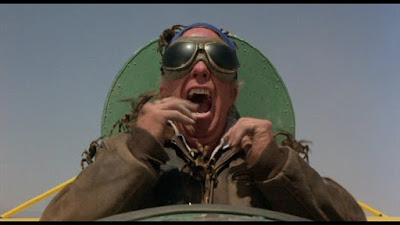 Kingdom of the Screamers

There’s a scene where Bolling is showering and dressing in her motel room; the camera pans away to reveal an arachnid creeping into the drawer of her dressing table. The seasoned viewer expects her to discover the spider, scream, and run for Bill’s arms. Instead she shows only detached curiosity, even affection for the twitching, furry, eight legged freak, handling it with calm interest. It is a surprising moment and elevates proceedings.

Besides, the movie provides plenty of other howls to make up for it – probably some of the best is achieved by the crop dusting flyer, who must at least have a claim to the most prolonged screaming sequence in cinema history. The camera just sits there and watches him let rip, as crafty spiders send him spinning into a fatal prang.

Kingdom of the Stampers

Things only really crumble in the final third, as Shatner and co hole up in a cabin, discover various parties cocooned in silk, and plug holes by which their crawling tormentors come tumbling in. The energy is rather sucked out of proceedings the longer we’re in there, and the ridiculousness becomes harder to live with: the spiders cut the phones; a spider is crazy glued to Shatner’s cheek. Then the whole narrative descends into a lot of stamping, which is farcical at first, then (worse) a little dull.

Kingdom of the seventies

Apparently there are plans for a remake afoot, but really, who’s asking for that? Better to explore more of Shatner’s early output, and see what other cobwebbed treasures might be found. Stay tuned.