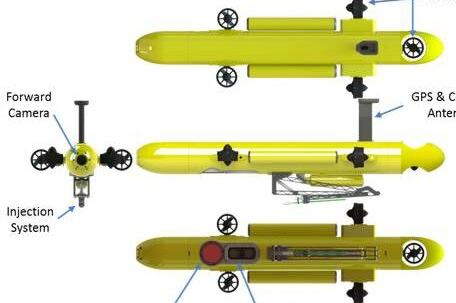 Delighted to announce that from 2016 I’ll be contributing a science fiction column to The Engineer magazine, which has been reporting on engineering innovation since 1856. The column is part of a new look for the mag, and will see me speculate on how the last month’s engineering news might plant the seed of a cracking scifi story.

I think it’s an excellent idea (I regularly search the site’s news pages for inspiration anyway) and it’ll be a privilege to work with Features editor, Stuart and the whole team.

This gig was the result of an open competition, so I thought I’d post my winning submission here, and give a flavour of what to expect.

Queensland University, it’s reported, have developed COTSbot – a robot designed to control populations of the “Crown of Thorns” starfish (COTS). These spiny Sea Stars are doing terrible damage to the Great Barrier Reef, and COTSbot is designed to patrol the Coral Sea, seeking out and destroying them via a fatal injection of bile salts.

Ouch. Quite apart from this sounding pretty harsh on the starfish, this is exactly the kind of story that can set the SciFi sense a-tingling. For while its creators are rightly proud of the robot’s marine endurance and machine learning capabilities, any talk of human interference in delicate habitats, particularly with reference to Australia, does have rather unfortunate associations.

Cane Toads spring to mind. Rabbits too – millions and millions of them. COTs isn’t an invasive species as such, but that’s not the element of the story to which the SciFi mind is drawn. Of much more interest are human efforts to eradicate these species.

Such culls rarely meet with success. Even the brutal Myxomatosis, which wiped out 500 million rabbits inside two years, failed to complete the job – rabbit numbers levelled out at 100 million then began to climb again, as the rabbits developed an immunity to the disease.

There’s a marine equivalent. During the 1990s the northern Pacific Sea Star hitched a ride to Tasmania and quickly set about taking on plague proportions. Human efforts to control its numbers through organised mass hunts created a much bigger problem: cutting them up and tossing them back in the sea, it turned out, wasn’t such a grand idea: each part regenerated and grew a new sea star. Oops.

COTSbot seems at first sight like a more considered and clinical sort of culling agent. An agile, adaptable learning machine that will cause less mess than an unpredictable virus, or the clumsy efforts of human volunteers. But SciFi writers are by nature fascinated by robots, in particular their capacity to run beyond our control.

Talk of COTSbots “working the reef autonomously by December” resonates with those well-known SciFi tropes of man’s excessive confidence in his ability to control artificial intelligence, and equally machines’ questionable willingness to obey human orders, or even ability to comprehend them – particularly in reference to scale and limitation.

There are several directions a scifi writer could explore with this story: there’s Bostrom influenced ideas of the “paper-clip maximiser”, where out of control AI destroys the world through devotion to a simple repetitive task. Could COTSbot, learning from shared devices, decide to eradicate anything and everything that posed a threat to Coral Reefs? How soon before it turns its attentions to every other living thing in the oceans, adapting and evolving to hunt and kill all marine life? That in turn raises other possibilities: how might COTSbots adapt to better hunt? Would they learn to camouflage themselves, hiding on the sea floor like rays, or impersonating other species, like the Mimic Octopus?

Such a story might open with some hard-bitten hero diving into the South Pacific, armed and ready to hunt COTSbots, which have multiplied like Sea Stars to plague proportions. I guess this would make for a kind of marine Blade Runner, where our protagonist is a highly specialised hunter.

Perhaps he would dive into a more complex conflict – what if humanity had developed a new robot to hunt COTSbots? Might the two robot species make peace and turn their culling attentions to the real threat to coral, sea star and robot life alike – mankind? Might the oceans be protected from man by his own creations? In that case our story could open not with a hunter but with a castaway, an account of some wreck survivor desperately trying to reach land, hunted by both natural and robotic marine predators.

You could go in a different direction of course. I rather like the idea of mankind helping the robots as opposed to fighting them. What would happen to the COTSbots, after all, if they grew in intelligence but simply completed their work to brief?

“What now?” they might ask. Might COTSbots become depressed without a purpose? I rather like the idea of a story where human divers head beneath the waves to rehabilitate hundreds of listless self-aware robots, helping them find beauty and meaning in the depths of the ocean, and new parts to play in preserving the delicate marine environment. Such a story might find human and robot developing a curious underwater friendship, based on new forms of communication and understanding: perhaps bio-luminescence or some such.

Which kind of story would Engineer readers prefer? I think the dystopian interpretation would win out. As one commenter on the website story notes: “I don’t suppose anyone else sees this as the precursor of the Sentinels in the MATRIX?”